2017 marks the 20th re-establishment anniversary of Ca Mau province (January 1, 1997 - 2017). Previously a poor agricultural province, Ca Mau has achieved remarkable achievements in all socioeconomic sectors in the past 20 years, and is confident of becoming a middle-income province and one of four key provinces in the Mekong Delta. Mr Nguyen Tien Hai, Chairman of the Ca Mau Provincial People's Committee, said, “This success comes from the effort to unite all resources, constantly promote creativity and dynamism, and actively tap every potential and advantage that the Party, government and people of Ca Mau province have.”

If you can encapsulate Ca Mau province’s development achievements over the past 20 years, what will you highlight?
Twenty years after its re-establishment, the economy of Ca Mau province has maintained a good growth rate of 8.3 per cent a year, with the economic structure shifted towards modern industry. In 2016, the gross domestic product (GDP) reached VND35,373 billion, 8.8 times higher than that in 1997; GDP per capita was VND36.5 million, 10.5 times higher than in 1997; and State budget revenue grossed VND4,422 billion, an increase of 11 times over the first year after re-establishment. Its export markets continued to be expanded, with its flagship seafood being present in 40 countries with more than 100 international buyers. Export turnover rose 7.7 times over 1997 to US$980 million in 2016.

The socioeconomic infrastructure system has changed significantly. Now, traffic and commercial connections to Ca Mau are much easier than ever in waterway, roadway and airway. The southern coastal corridor route linking Vietnam, Cambodia and Thailand passing the Ca Mau Gas - Power - Fertiliser Complex; Ho Chi Minh Road reaching Dat Mui; and Phung Hiep Highway (Ca Mau - Can Tho City), among others, will be important premises for Ca Mau's development in the future.

Particularly, the administrative reform has been drastically accelerated by the government of Ca Mau province and initially produced positive results, as evidenced by its rising Provincial Competitiveness Index (PCI). Business development and investment attraction progressed with the care of authorities and investment commitments of domestic and foreign companies to big groundbreaking projects in the province.

Along with the economy, the social and cultural aspects also have witnessed positive and comprehensive changes, especially in ensuring social security. By the end of 2016, the poverty rate slid to 6.94 per cent, the rate of malnourished children fell to 12 per cent, and 77 per cent of residents had access to health insurance. After more than 5 years of carrying out the new countryside construction programme, Ca Mau has 21 communes satisfying new countryside standards, or 26 per cent of total communes. The material and spiritual life of rural people has improved markedly. 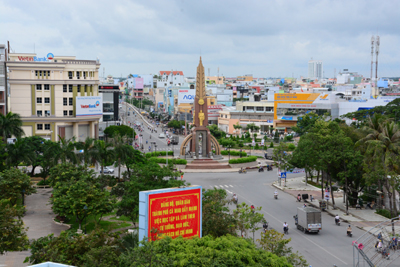 Very strong in agriculture and fisheries, Ca Mau is however facing severe impacts from climate change. What are practical solutions that the province has taken to respond to the current prolonged droughts and salt intrusion?
In 2016, the province had over 301,000 ha of aquaculture, including more than 278,000 ha for shrimp farming, and caught over 490,000 tonnes of fish (commercial fishing and farming), including 159,000 tonnes of shrimps. In recent years, climate change impacts in Ca Mau province have become more pronounced and fierce. Extreme weather phenomena occur frequently with increasing intensity, unpredictability and damage. Particularly in the dry season in 2016, droughts, saline intrusions and land subsidence caused great damage to people's production and livelihoods and infrastructure works. Moreover, there is a constant threat to forest protection and forest fire prevention efforts (melaleuca forests), including U Minh Ha National Park.

To mitigate damages caused by droughts and saline intrusions, to protect production and people’s livelihoods, Ca Mau province has been carrying out consistent solutions according to the proposed plan to actively and effectively respond to climate change, enhance resource management and protect the environment. In addition, structural solutions have also been launched by the province to cope with new situations: Building Ca Mau irrigation system with two regions of Southern Ca Mau and Northern Ca Mau, building embankments along the coast and river estuaries with three projects costing about VND1,530 billion, accelerating the progress and utilising resources for the deployment of a project to build and upgrade 108 km of sea dykes, preparing necessary conditions for the implementation of another project to build a new 149-km sea dyke in the East Sea. Although structural solutions play a special and important role, they require such huge capital that they are beyond the capacity of the province. Thus, Ca Mau reported and recommended to the central government for support for their deployment.

Non-structural solutions are also essential and effective solutions executed by the province, like planting and protecting protective forests; reviewing, adjusting and supplementing socioeconomic development plans at all levels and branches to match objectives and tasks of coping with climate change and sea level rise in Ca Mau province; studying the conversion of appropriate plants and animal breeds to adapt to climate change and sea level rise; enhancing knowledge, improving adaptive capacity, and ensuring livelihoods for people in areas vulnerable to natural disasters; building community models that adapt effectively to climate change.

Endowed with enormous potential for wind power development, Ca Mau province is carrying out this sector development strategy aimed to turn coastal areas into wind power plants to ensure national energy security and increase local budget revenues. Could you elaborate on the strategy to turn wind into power?
With a coast of 254 km, Ca Mau province has great potential for wind energy development investment. In order to strengthen the legal basis for investors to tap wind power potential in the province, Ca Mau province established the wind power development plan to 2020, with a vision to 2030, approved by the Ministry of Industry and Trade in Decision 1402/QD-BCT dated April 11, 2016. According to this master plan, the installed capacity of wind power in Ca Mau will reach 350 MW by 2020 and over 3,600 MW by 2030. Specifically, up to 2020, five wind power projects with a total installed capacity of 350 MW, equivalent to 1 billion kWh of electricity, will be developed on 9,000 ha of coastal areas in Ngoc and Dam Doi districts. By 2030, 11 more projects will be built in six potential coastal districts with a combined capacity of over 1,300 MW.

With abundant potential and advantages for wind power development, Ca Mau province will direct relevant departments, agencies and localities to find appropriate solutions to support and create the most favourable conditions for the investment environment to draw more investors to use wind and solar energies in potential areas as planned and gradually form core areas of clean energy for the nation.

On that basis, the province will carry out key solutions and tasks to maintain a higher economic growth rate than the average of the region and the whole nation, gradually narrow the development gap, and effectively mobilise and use investment resources to meet capital needs for economic development, improve the quality of human resources, develop and promote scientific and technological application and transfer to raise labour productivity and economic competitiveness. At the same time, the province will further reform administrative procedures along with capacity and performance improvement of State administrative apparatus from provincial to grassroots levels. It will focus on raising the Provincial Competitiveness Index.

With the well-defined strategy and the active and firm leadership of the Provincial Party Committee and the Provincial People's Committee, I believe that Ca Mau province will achieve its goal of becoming a well-developed province in the Mekong Delta.