That is the historic footprint of Buddhist Emperor Tran Nhan Tong from Tay Yen Tu (West Yen Tu) in Son Dong - Bac Giang to Dong Yen Tu (East Yen Tu) in Dong Trieu - Quang Ninh to enter nirvana. Besides, the company has been carrying out the much-expected renaissance of “material and intangible” culture to improve material and spiritual values of local ethnic groups and create a strong appeal to tourists from all over the world to experience and enjoy. 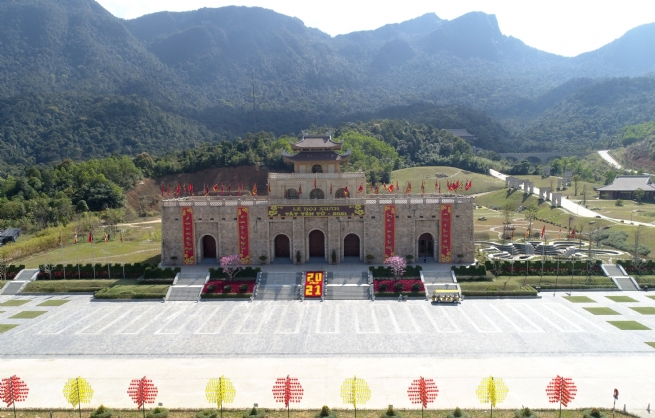 Cared for and facilitated by leaders of Bac Giang province, relevant bodies and Son Dong district, legal procedures were quickly completed for the project to be launched, she emphasized.

Detailed plans were made from late 2016 to the end of the first quarter of 2017 and the first-phase project was brought into operation in February 2019. Key items include a cable car system from Lower Pagoda to Upper Pagoda, and a walking pilgrimage path to Dong Pagoda. Some existing works and landscapes of the first phase use 15-16 ha (only a tenth of the total approved project area of 136 ha).

Impressively, the project was put into operation in 2019. Bac Giang province hosted the “Bac Giang Culture And Tourism Week” in Tay Yen Tu and welcomed about 150,000 visitors. In 2020, due to the impact of the COVID-19 pandemic, although it was open only five days (from the 2nd to the 6th days of the first month of the Lunar Year), Tay Yen Tu welcomed half as many visitors as in 2019. On the sixth day of Lunar New Year alone, 8,000 tourists used cable cars out of 10,000 visitors. However, due to COVID-19 pandemic impacts, tourist arrivals in 2020 were only 50,000. In early 2021, as COVID-19 outbreaks in Quang Ninh and Hai Duong provinces prevented tourists from visiting Dong Pagoda and using the cable car, all services were free of charge.

Renaissance and promotion of cultural values

Sharing second-phase investment ideas, Ngan said, the company mainly focused on researching and connecting resort, service, sports and ecological areas to serve the diverse needs of tourists during weekends in the remaining months of the year. For example, for local tourists, the distance from Bac Giang City to Tay Yen Tu is not far and people visit the place on Saturday morning and return on Sunday afternoon. The weekend excursion is very suitable for many Vietnamese families. When coming to Tay Yen Tu, the elderly go on pilgrimage to worship Buddha; young men play sports (tennis); young women go to spa, yoga and beauty salon; and children experience agriculture. Besides, the company is actively collecting data on indigenous cultures to revive and promote unique values here. 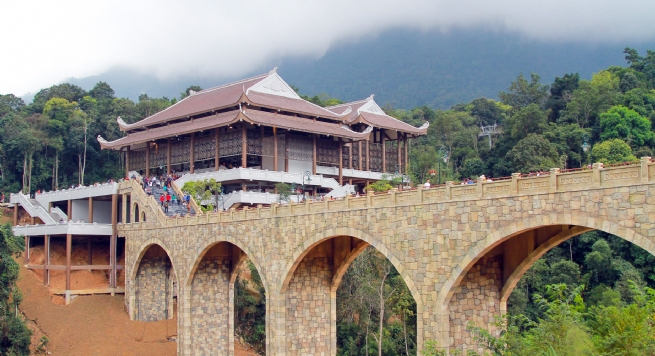 In combination with spiritual items of the Buddhist Church of Vietnam, the project still focused on recreating the crystallization of the "path to Buddha's teachings" and "spreading the footprint of Buddhist Emperor Tran Nhan Tong". Therefore, when the second phase was launched, the company invited experts of Buddhism, culture and history to combine values to select ideas that it has diligently researched for years.

“This is both an opportunity and a challenge for the company to build a new idea to preserve and promote the value of “the path of Buddha propagation” and “spreading the footprint of Buddhist Emperor Tran Nhan Tong,” she added.

"This ‘spiritual path’, if paved with asphalt for safer traffic, will be a good pilgrimage journey to Tay Yen Tu,” she added, expressing her trust in the new dynamic and firm leadership of Bac Giang province.

Accordingly, the company's operating point of view in Tay Yen Tu is always to create maximum conditions for development of local communities: (1) Giving priority to recruit locally unskilled workers; (2) employing high-quality local human resources who may be studying in Hanoi. The company planned to employ 500 - 1,000 local unskilled workers. The company also planned to cooperate with local ethnic minorities like Dao, Tay and Nung to introduce cultural identities to tourists.

The company hoped to promote and preserve “tangible and intangible culture” when tourists come to Tay Yen Tu. At the same time, the company proposed the Bac Giang Department of Agriculture and Rural Development to help ethnic minorities grow and develop medicinal plants in the forest, protect the forest and prepare medicinal herbs for tourism purposes. Accordingly, the company also developed a "plan to preserve cultural and environmental communities, protect forests and create jobs for sustainable local development.”

When the government of Bac Giang province, Son Dong district, Tay Yen Tu Service Joint Stock Company and local ethnic minorities have the same voice to build the "Tay Yen Tu brand", it is certain that the “footprint of Buddhist Emperor Tran Nhan Tong” will spread widely in the near future.