By associating and cooperating with Western Export Food Processing Joint Stock Company (Westfood) to develop raw material areas in the form of off-take contacts, a farmer in Phung Hiep district, Hau Giang province, can obtain an income of VND100 million per crop. 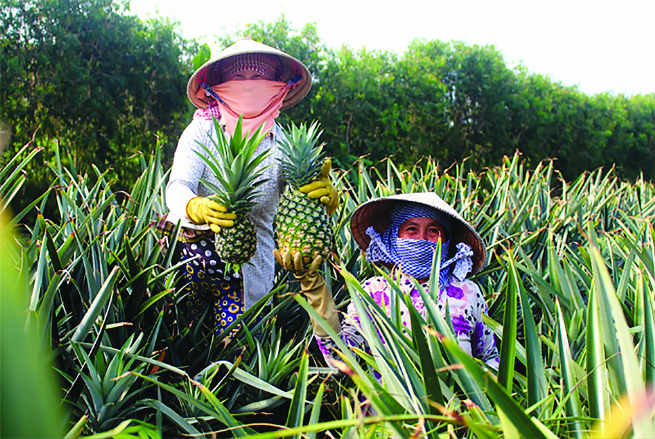 Westfood is one of well-known exporters of canned fruit in the Mekong Delta. In 2015, with the desire to bring Vietnamese fruits to international markets on a larger scale, Westfood considered building a stable and sustainable tropical fruit production area as one of critical conditions for business growth. To date, Westfood has controlled the fresh fruit area, which is growing mango, papaya, cucumber, dragon fruit and other fruits. Particularly, King MD2 pineapple is a key fruit, which leverages Westfood to make new business breakthroughs in the market and strengthen its creditability for long-term cooperation with major partners in the world from South Korea, Japan, Europe, the United States and other nations.

For farmers to build wealth from King MD2 pineapple

King MD2 pineapple is favored by people in Phung Hiep district, Hau Giang province because local farmers can earn VND80 - 100 million per hectare a year. This profit is 8 - 10 times higher than that of growing sugarcane, making farmers extremely excited.

Phung Hiep district of Hau Giang province is the first locality to cooperate with Westfood to develop King MD2 pineapple growing areas since 2017. Up to now, the total area of King MD2 pineapple in Phung Hiep has reached 120ha, including 33ha of GlobalGAP-certified area.

With King MD2 pineapple, farmers will be provided with seedlings and guided by the company, from planting to harvesting. So, they do not need to spend initial money for growing the crop and poor households can also adopt this model if they have available land.

Le Van Sy, a farmer in Phuong Binh village, Phung Hiep district, said, King MD2 pineapples are harvested every 12-18 months. “Through the first trial planting, people are very excited about King MD2 pineapple which is heavy in weight, weighing an average of 1.8kg each, with dominant fruits weighing up to 2.8kg, highly productive and resistant to acidity in the low-lying land of Phuong Binh commune," he added.

Vo Van Vu, also in Phuong Binh, said, "20 years ago, only sugar cane was cultivated here. If there was an outsourcing company, it would help. If there was none, sugarcane was abandoned on the field. Shifting to pineapple, people are obviously excited and happy with their work."

Westfood sets a revenue target of VND1,000 billion by 2025. With this goal, Westfood will further invest a lot in material areas in Hau Giang and neighboring provinces. King MD2 pineapple is expected to be grown on 2,000 ha while other crops like mango and dragon fruit will be cultivated on 1,000 ha to establish stable input supply sources for its factories and meet existing market demands. At the same time, it will help create more jobs and increase income for farmers in the Mekong Delta.

With a well-prepared sustainable investment in material areas, Westfood is gradually realizing the goal of becoming a Vietnamese fruit ambassador and enhancing the image of Vietnamese agricultural products in the international market.