As the southernmost province of the nation, Ca Mau has confronted a lot of disadvantages in investment attraction. The dynamism and creativity of provincial leaders to uphold the spirit of learning experience from others and supporting investors to overcome hardships together has brought about positive results. The number of registering investors and licensed projects in Ca Mau province have increased over the years. Particularly, the province has seen many national projects that strengthened the new stand for Ca Mau towards its 20th anniversary of re-establishment. Vietnam Business Forum has an interview with Mr Mai Huu Chinh, Director of the Ca Mau Department of Planning and Investment, to learn more about these contents. Truong Thanh reports.

Could you please portray the current picture of investment attraction in Ca Mau province?
In 2016, Ca Mau granted investment registration certificates to 36 projects with a total registered capital of VND6,998 billion (an increase of VND5,008.5 billion over 2015). By the end of 2016, the province had a total of 233 investment projects worth VND83,414 billion. Big projects included Block B - O Mon gas pipeline project (VND14,694 billion), a gas processing plant (VND4,700 billion), a power plant (VND13,700 billion), and a fertiliser plant (VND18,749 billion). These projects have created a strong motive force for socioeconomic development, promoted economic restructuring, raised budget revenue and created jobs for local labourers.

At present, Ca Mau province has seven foreign direct investment (FDI) projects with a combined registered capital of VND14,916 billion (US$788 million). In general, the number of FDI projects has not changed for many years. Newly established enterprises in 2016 did not increase much in number, but slid in registered capital. In 2016, the province had 469 fresh companies with VND1,567 billion of registered capital (compared with 468 companies and VND2,745 billion a year earlier).

Administrative procedure reform facilitated investment attraction in Ca Mau in 2016. Would you mind elaborating on breakthroughs in this work?
In order to attract more investors and create a motive force for comprehensive economic development, Ca Mau province needs to focus on accelerating administrative procedure reform. Accordingly, provincial leaders issued a public administration reform plan while agencies and localities have actively carried out regulations, guidelines and conclusions of the Provincial People's Committee Chairman.

In the coming time, the province will continue to reduce the settlement time of all reduceable administrative procedures; review and simplify all administrative procedures under the jurisdiction of the Provincial People's Committee demonstrated to trouble or irritate the public and business. It will also establish a dialogue mechanism of local authorities with people and enterprises. In addition, Ca Mau will further perfect the application of online public services and consider shortening the processing time, apply computerisation and interconnect responsible agencies to change processes in the province, ensure the satisfaction of organisations and individuals in the service provided by State administrative agencies at 95 per cent or higher. 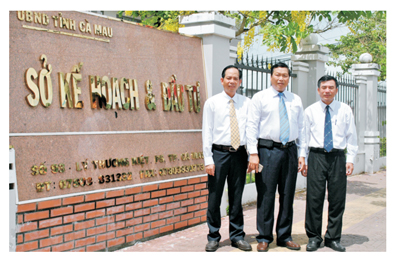 Would you be kind enough to tell us opportunities that investors can approach when they arrive in Ca Mau province? How has the Provincial People’s Committee specifically supported them to deal with difficulties and helped them to do business with peace of mind in the province?
In general, Ca Mau is a potential land, endowed with favourable natural conditions, temperate climate and diverse ecosystems. With its advantages in natural conditions, the province can develop a wide range of economic sectors, especially agriculture (organic aqualculture), marine economy and tourism (ecological and leisure tourism), industries using renewable energies (wind power and solar power), and processing industries. Especially, Hon Khoai Port project, which was approved under the investment policy of the Government, is expected to further facilitate local investors when it goes into operation.

In addition, Ca Mau is planned to be one of four key areas in the Mekong Delta and is staging strong growth. Currently, as not many investors come to Ca Mau, its potential has yet to be tapped strongly and effectively. Furthermore, Ca Mau is applying investment incentives to draw more investors to the province and shortening the time required for handling investment licensing procedures in relation to general regulations. Moreover, Ca Mau has an abundant young labour force, most of whom have basic vocational training and demand low pay. Therefore, Ca Mau is really a land of opportunities for investors.

However, as it is geographically distant from major economic centres such as Ho Chi Minh City and Can Tho City, the infrastructure system has not been fully invested for perfection and the investment rate is higher than other localities in the country, a certain disadvantage to investors. Ca Mau now has three industrial parks and one economic zone approved for establishment by the Prime Minister, but only Khanh An Industrial Park is available for rent to investors. It is also relatively difficult to hand clean land to investors as the province lacks budgets for clearing investment sites and arranging resettlement areas.

To compensate for these disadvantages, the Ca Mau Provincial People's Committee always provides the most favourable conditions for investors to study and do business in the locality. Ca Mau is striving to invest in infrastructure construction, clear up and prepare the ground for investors to quickly deploy their projects, and support them with essential infrastructure works such as traffic and electric systems built to the fence of industrial zones and projects. Apart from investment attraction and incentivising policies provided by the Government of Vietnam, the province is presently applying business development support policies and solutions. Especially, the province has regularly organised business - government dialogues to promptly grasp and solve all difficulties facing local enterprises, thus enabling them to boost production and business performance, and increase effective use of investment capital.

To gradually make Ca Mau a relatively developed province in the Mekong Delta as stated in the Resolution of the 15th Provincial Party Congress, what fields will Ca Mau focus on drawing investment to unlock its strongest potential?
In an effort to become a relatively developed province in the Mekong Delta, Ca Mau will focus on developing the economy intensively and increasing economic productivity and commodity quality. The fields that the province is focusing on drawing investment capital include high quality agriculture powered by modern technologies, industry (renewable energy such as wind power, solar power and wave-induced power; gas-fuelled industries like electricity and fertiliser; processing industry, etc.), tourism (ecotourism, marine tourism, sightseeing, cultural discovery, sporting tourism and leisure tourism, etc). It will invest to build and operate Hon Khoai Port and Nam Can Economic Zone.

In addition, to create favourable conditions for investors to do business, the province will lure investment capital for infrastructure construction in industrial parks and economic zones, as well as trade and service development.