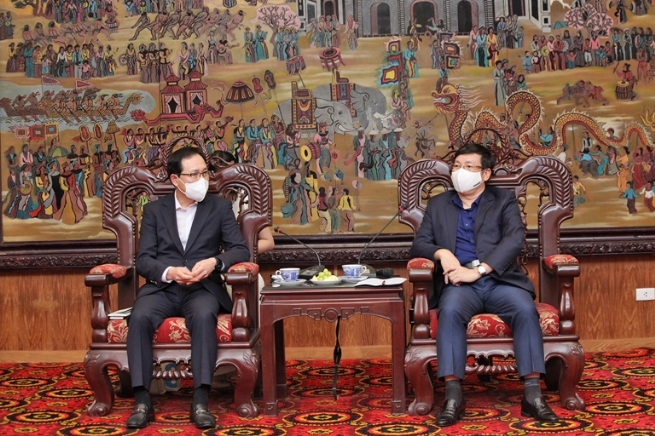 He suggested Vinh Phuc work more closely with Bac Ninh and Bac Giang provinces where Samsung Vietnam’s factories are located. The three provinces should sign a cooperation agreement to facilitate customs clearance of goods of Samsung Vietnam’s subsidiaries in the fastest time. Samsung Vietnam has helped develop more than 130 parts providers in Vietnam and stayed ready to assist Vinh Phuc to develop parts manufacturers by sending free experts to Vinh Phuc province for this purpose. He also suggested Vinh Phuc consider and settle entry procedures for experts as soon as possible for Samsung factories in the province.

For his part, Chairman Le Duy Thanh expressed his deep thanks to South Korean businesses for supporting Vinh Phuc to hire special planes to bring home Vinh Phuc citizens in Ho Chi Minh City and southern provinces. At the same time, he highly appreciated the contributions of Samsung’s companies in Vinh Phuc to local socio-economic development. Therefore, it is the responsibility of the Party Committee to provide timely support and facilitation for businesses, including parts providers of Samsung, in Vinh Phuc province.

Regarding Mr. Choi Joo Ho's proposals, Chairman Thanh said that Vinh Phuc is actively asking Bac Ninh and Bac Giang provinces to sign a memorandum of understanding as soon as possible to speed up transportation and distribution of goods as expected by Samsung. Thanking Samsung Group for its goodwill to help local parts producers improve productivity and product quality, he assigned the Department of Industry and Trade and the Industrial Parks’ Authority to complete necessary procedures to send a list of businesses in need of support to Samsung Group.

As for the proposal for reduced time for immigration, Chairman Le Duy Thanh said that this work relates to many stages, from central to local authorities. Vinh Phuc pledges to deal with this within a week under its jurisdiction and ask relevant bodies for support to speed up settlement of administrative procedures.

Also at this meeting, he emphasized that Vinh Phuc is stepping up investment promotion programs, completing infrastructure for investors in relation with Samsung Group. As many Korean people are living and working in Vinh Phuc province, Chairman Thanh hoped that Samsung Vietnam, in addition to investing in industrial development, will further invest in education and medical care for foreigners, including South Koreans.

At the same time, he hopes that Samsung Group will support Vinh Phuc to carry out policies on cultural development, social security, and new rural construction, thus helping promote cultural exchanges between Vietnam and South Korea.