In 25 years since reestablishment, with creative and breakthrough approaches and actions, from a slow-growing province, Bac Kan has endeavored to make progress and achieved many encouraging results. The achievements are a solid foundation for Bac Kan to realize its further goals in the coming period. On the occasion of the 25th reestablishment anniversary of the province, Vietnam Business Forum has an interview with Mr. Nguyen Dang Binh, Deputy Secretary of the Provincial Party Committee, Chairman of the Provincial People's Committee of Bac Kan. Duy Binh reports.

Could you please briefly introduce the outstanding achievements of Bac Kan province 25 years after reestablishment?

On January 1, 1997, Bac Kan province was officially re-established from the separation of four districts and towns of former Bac Thai province and two districts of Cao Bang province. It was a purely agricultural province with inadequate facilities. With ongoing efforts of the Party, government and people in the province, Bac Kan has overcome all difficulties in the way to sustain its development.

Supported and directed by the Party, the National Assembly and the Government of Vietnam as well as central agencies and assisted by localities nationwide, Bac Kan province promoted its solidarity tradition, overcame hardships and mulled joint efforts, consensus, diligence and creativity of local people in the course of production and homeland construction.

Over the past 25 years, from a very poor province, Bac Kan has made forward progress and achieved many encouraging results. The gross regional domestic product (GRDP) growth was estimated at 7.7% annually in the 1997-2021 period. Specifically, agriculture, forestry and fishery expanded by 5.2%; industry and construction grew 13.6% (industry advanced 11.3% and construction climbed 15.6%); and service looked up 10.1%.

The economy has been restructured towards a desired pattern. From a purely underdeveloped agricultural province, Bac Kan developed quite well in economic areas, especially the service sector and initially formed a development foundation for industrial and construction sectors. Specifically, the share of agriculture, forestry and fishery sectors has shrank from 60.9% in 1997 to 29.8% in 2021; the share of the industry and construction sectors rose from 9.5% in 1997 to 14.7% in 2021; and the share of service sector expanded sharply from 29.6% in 1997 to 52.4% in 2021.

The province's population size has enlarged gradually over the years, from 265,200 people in 1994 to nearly 319,000 people in 2021. The workforce has grown in number and quality. The labor structure has changed for the economic structure, but the pace of change is slower. Up to now, the shares of workforce in agriculture, forestry and fisheries - industry and construction - services are 66.7% - 7.7% - 25.6%, respectively.

Social and economic infrastructure has been invested and upgraded. Many projects and traffic works have been invested and constructed to provide favorable conditions for smooth distribution of goods and human mobility. In addition, urban and rural infrastructure has been constructed and upgraded to substantially change the face of urban and rural areas, enhance production capacity and enrich people's life.

Culturally and socially, the province has invested in expanding the educational network to enhance training quality. Healthcare has been significantly improved. Literature, arts, journalism, publishing, radio and television have been developed. Science and technology have largely contributed to socioeconomic development. Local defense and military work have been upheld. Political security, social order and safety have been maintained.

In the 25 years since its reestablishment, construction, development and reform, the Party, the government and the people of Bac Kan province have united and flexibly and creatively applied Party and State policies to socioeconomic development. Therefore, Bac Kan has obtained many important achievements in socioeconomic development, defense, security, Party construction and political system, which serve as a solid foundation for Bac Kan to realize its further goals in the coming period. 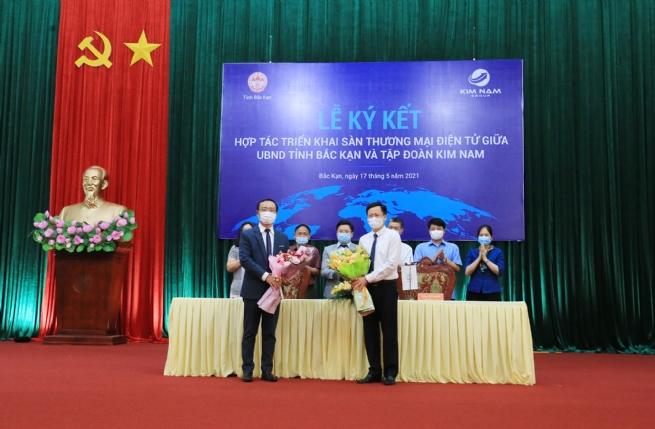 By 2030, Bac Kan will become a moderately developed province in the country and a fairly developed province in the northern upland and mountainous region with a harmonious spatial system of sustainable and modern urban and rural areas and a good living environment. To develop commercial agriculture and forestry, the province will gradually build a hi-tech agricultural model; prioritize processing development; and complete socioeconomic infrastructure, transport infrastructure and rural infrastructure construction. To draw more investment funds for tourism development, diversify and improve the quality of tourism services, the province will further improve the material and spiritual life of the people, especially in rural areas, and focus on sustainable poverty reduction.

Vision to 2050: Bac Kan will strive to become a dynamic economy; have a harmonious spatial system of sustainable and modern urban and rural areas and a good living environment. Its development is quite good relative to other localities in the country.

What will Bac Kan province need to do to achieve these goals?

To successfully realize goals and tasks stated in the Resolution of the 12th Provincial Party Congress and the Resolution of the 13th National Party Congress, Bac Kan province needs to promote self-reliance, make the most use of support from central authorities and assistance from other localities, and uphold creativity of all-tier administration. The province will foster the strength of great unity of the masses, the pioneering and exemplary character of Party members, and the sense of responsibility of administrative agency leaders to their tasks.

The province will ensure national defense, maintain political security, social order and safety, uplift the people's material and spiritual life; and strengthen great public unity - a decisive factor to successfully realize all the tasks assigned by the Party and the people.

Do you have any message to the business community and investors seeking to do business in Bac Kan province?

The province has introduced incentive policies to attract investment, improve the business investment environment, and carry out solutions for higher the Provincial Competitiveness Index (PCI). Its PCI has steadily advanced over the years to reach the median level of the northern upland and mountainous region and the nation.

In addition, the province has applied many incentive policies to woo investors and businesses to bring agricultural, forestry and tourism development projects. By the end of 2021, Bac Kan licensed more than 148 investment projects, largely involved in mining, agricultural processing, construction material production, tourism and hydropower.

Determined to improve the investment environment, Bac Kan province has reformed investment attraction management, from entities to be administered to customers to be served. At the same time, the province has actively called for capable investors whose projects will create many jobs and increase income for local workers. The government of Bac Kan province is committed to supporting investors when they carry out their projects.