Reaping "Sweet Fruits" after 30 Years of Innovation and Integration

At the time of its re-establishment, Tra Vinh was one of the most difficult provinces in the Mekong Delta. In that context, in response to the reform policy initiated by the Party, the Provincial Party Committee set forth a correct, comprehensive policy for the province that created high unity and consensus of all people and took advantage of the leadership of the Party Central Committee, the support of central authorities to lead Tra Vinh to develop and secure a new position in the region and the country. Let's learn more about the "sweet fruits" that Tra Vinh province has reaped in 30 years since re-establishment (1992 - 2022) in an interview with Mr. Le Van Han, Chairman of the Provincial People's Committee. Cong Luan reports.

In the past 30 years, with its available potential and strengths plus the tireless effort of the entire Party and people, Tra Vinh province has risen to reap outstanding socioeconomic achievements. Would you mind telling us about them?

The most obvious achievement of Tra Vinh province in the past 30 years is the effort of the entire political system and the consensus of the people and the business community. Political security, social order and safety are stable; armed forces are further strengthened to meet new combat requirements. The great unity of three ethnic groups - Kinh, Khmer and Hoa - is constantly fortified and consolidated. In particular, in the context of the complicated development of the COVID-19 pandemic, Tra Vinh people have united, supported and helped each other to overcome difficulties. Up to now, the province has basically controlled the pandemic and focused on restoring and stabilizing production.

Annual budget revenue grows strongly. It accelerated from only VND40 billion in 1992 to VND5,062 billion in 2021 or 126 times of growth. Investment resources for infrastructure construction have achieved many important results. The total investment fund of the society increases every year, reaching over VND31,515 billion in 2021. The road traffic system is rapidly developed to offer smooth links to Ho Chi Minh City and other provinces in the Mekong Delta.

The province focuses on developing the power grid to serve production of enterprises and livelihoods of local people. The access to electricity increased from 7.14% of households in 1992 to 99.25% in 2021. The province is home to 4,498-MW Duyen Hai Thermal Power Center, 140-MW Trung Nam Solar Park, five wind power farms in operation. It basically completed construction of 500kV and 220kV power transmission lines. At present, the province has 171 operational cooperatives and 3,300 enterprises which employ over 96,500 workers and has 385 valid investment projects, including 42 FDI projects with a total registered capital of US$3.1 billion.

Apart from economic development, social and cultural life also thrives. Education and training is developed dramatically and healthcare is much improved. Health insurance coverage reaches 96% of the population. Policies on poverty reduction and people with meritorious services to the nation are implemented consistently, timely and effectively. National defense and security, social order and safety are maintained.

To make Tra Vinh one of marine economic development hubs of the Mekong Delta as per the Resolution of the 11th Provincial Party Congress, what strategic tasks will the province focus on? 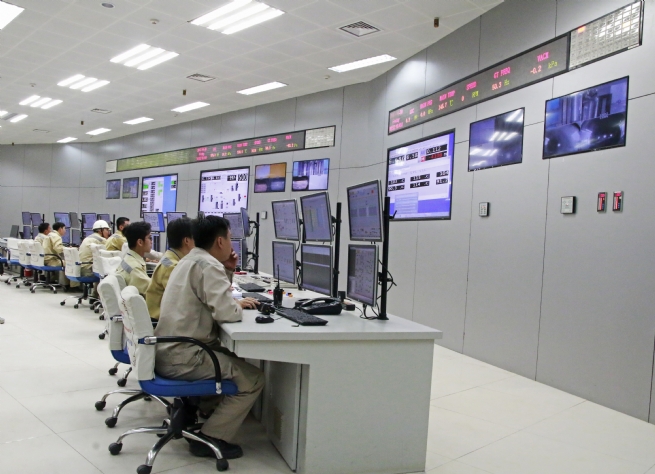 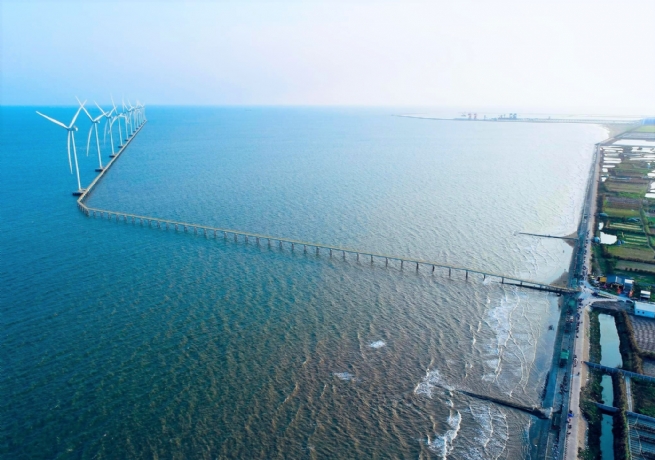 However, beside its encouraging achievements, marine economic development is still not commensurate with local available potential. Therefore, the 11th Party Congress of Tra Vinh province set the goal of “Mobilizing maximum resources, investing in regionally linked infrastructure, promoting rapid and sustainable development to build Tra Vinh into one of key marine economic development hubs in the Mekong Delta.” To realize this goal, in the coming time, the province will focus on carrying out six main solutions: Reviewing, adjusting and synchronously developing master plans for marine economic development; developing fishing, aquaculture and processing aquatic products; developing Dinh An Economic Zone, industrial zones, coastal industrial facilities and key investment projects for marine economic development; developing renewable energy, aimed to reach 43.8 billion kWh by 2025; upgrading Duyen Hai Town to a third-class urban area and towards a smart city by 2030; speeding up tourism, trade and service development, and well carrying out the plan of the Standing Board of the Provincial Party Committee on implementation of Resolution 08-NQ/TW of the Politburo (12th term) on developing tourism into a spearhead economic sector.

To unlock renewable energy potential, especially wind power, in recent years, how has the province focused on promoting and attracting investment in this field? What about outcomes?

Tra Vinh is surrounded by Tien and Hau rivers with two estuaries of Hau and Dinh An. It has a 65km coastline where the average annual wind speed is 6.4 - 6.8m/s. Following Official Letter 795/TTg-CN dated June 25, 2020 of the Prime Minister and Decision 13309/QD-BCT of the Minister of Industry and Trade approving Tra Vinh Wind Power Development Plan in 2020 and to 2030, Tra Vinh Provincial People's Committee licensed nine wind power projects with a total installed capacity of 666 MW by the end of 2021. By October 31, 2021, five wind power projects with a total installed capacity of 256.8 MW started commercial operation. The province will assist investors to start investment for four remaining projects with a capacity of 344MW. In addition, to optimize renewable energy potential and develop large-scale energy projects, the Tra Vinh Provincial People’s Committee proposed to the Ministry of Industry and Trade to ask the Prime Minister for adding Tra Vinh wind power to the National Power Development Plan, commonly known as Power Plan VIII).

After the Power Plan VIII is approved, Tra Vinh will focus on supporting investors to implement projects according to the plan. At the same time, the province will coordinate with localities to support investors to deal with emerging difficulties, speed up construction progress of power substations, transmission lines and distribution grids to start commercial energization of heat power plants and renewable energy facilities to ensure reliable and stable electricity supply for Tra Vinh and neighboring provinces.

2022 is considered a rough year for Tra Vinh to achieve growth targets, especially the GRDP growth target of 10-11%. What is the breakthrough solution for our province to achieve this goal?

The Resolution of the Provincial Party Congress sets the target “Tra Vinh will meet new rural development standards before 2025 and lead Mekong Delta development before 2030. At the same time, the province will strive for an average annual GRDP of 10 - 11%, with the same growth set for 2022. This is the highest growth target in the Mekong Delta region and poses many challenges to the province. To achieve that goal, in 2022, the province will focus on executing its important programs of the Standing Board of the Provincial Party Committee to materialize the Resolution of the Provincial Party Congress like Program 10-CTr /TU on PCI growth to 2025; Program 11-CTr/TU on personnel quality improvement in 2021 - 2025 and to 2030; Program 21-CTr/TU on marine economic development in 2021 - 2025, to 2030 and to 2045; and Program 22-CTr/TU on urban economic development in 2021 - 2025 and to 2030. The province will implement the socioeconomic recovery and development program according to Resolution 11/NQ- CP dated January 30, 2022 of the Government and will complete Tra Vinh Planning for 2021 - 2030, with a vision to 2050.

Promoting its locational advantages such as the gateway to the East Sea for the Mekong Delta, Tra Vinh focuses on enlisting the Government's support and current preferential policies to unlock its untapped potential and advantages of climate and soil. It will especially give priority to development of marine and coastal economy; high-tech agriculture; agricultural processing; mechanical engineering; shipbuilding, logistics; and infrastructure construction. It will effectively apply or concretize mechanisms and policies on investment attraction to create a really open investment environment, focus on a clean land fund to call for investment. In addition, with the motto "Business is the heart for economic recovery and growth" of the province, especially in the current period of economic recovery and growth, Tra Vinh will continue to implement the "Government, friendly and responsible office" model and "Discipline, integrity, action, creativity, breakthrough and efficiency" to better serve people and businesses.