Over 30 years of development with a lot of twists and turns, intertwined difficulties and advantages, with right leadership and actions of the provincial government, with the consensus of the entire political system, the business community and people, Ninh Thuan has built its current strong position. 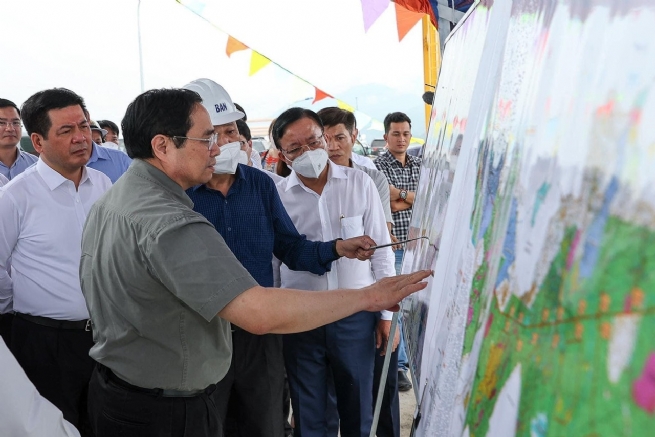 Hence, the province's economy has strongly developed. Its GRDP in 2021 was 69.6 times higher than that in 1992, representing an annual average growth of 8.14%, higher than the national mean. Total social investment fund expanded more than 440 times. The economy has been restructured towards a positive pattern where the share of industry and construction has been expanded by more than 20%. Furthermore, social, economic, health and education infrastructure has been gradually improved. Industrial zones have been effectively promoted to become an attractive destination for many domestic and foreign investors. Agriculture, forestry and fishery production and rural economy develop in a sustainable way. Tourism, with impressive attractions, is developing rapidly and becoming a spearhead economic sector of the province. Poverty rate has decreased rapidly, from 14.93% in 2016 to 4.57% in 2021.

Especially in the fight against the COVID-19 pandemic, the province has effectively adopted measures to prevent and control the epidemic, ensure social security, and maintain a high growth rate. GRDP in 2021 expanded by 9%, ranking fourth in the country, leading in the North Central and Central Coast regions.

Without doubt, Ninh Thuan is seeing new and promising development opportunities. But, to realize aspirations to become a rich and strong province, the province still has a lot of work to do. In addition to upholding its achievements it has obtained so far, the province needs to make full use of existing advantages.

Accordingly, the province needs clear and consistent strategies. It continues preserving, consolidating and cultivating unity and solidarity in the Party, government and people - this is one of the most important resources for rapid and sustainable development. Ninh Thuan has strictly grasped, substantively and effectively implemented the Resolution of the 13th Party Congress with three strategic breakthroughs, six key tasks, 12 key tasks and solutions, 5-year plan, 10-year strategy and resolution of the 14th Provincial Party Congress (2020-2025 term). The province has accelerated work decentralization, administrative reform and digital transformation, drastically improved the investment and business environment, and enhanced provincial competitiveness. It does not exchange social progress, social justice, cultural values, ethics and ecological environment for economic growth. It has enhanced the effect of foreign affairs, actively integrated into the international community in essence. These will be necessary and sufficient factors for Ninh Thuan to realize the goal of "Building Ninh Thuan into an attractive destination of Vietnam in the future" and complete the goals and tasks adopted by the 14th Provincial Party Congress and the 13th National Party Congress.

Today's changes of Ninh Thuan are clear. Proudly, Ninh Thuan has confidently stepped into the group of impressive economic performers. The 30-year journey is not long, but for a province with a low economic starting point like Ninh Thuan, what it has achieved is very respectable. But, that is only the beginning of development aspirations for a "Ninh Thuan of special values."