Currently, Nam Dinh province has 10 industrial parks approved by the Prime Minister to be included in the Vietnam Industrial Park Development Plan, covering a total area of 2,046 ha. Six industrial parks are operational, including Hoa Xa, Bao Minh, My Trung, Rang Dong Textile and Garment, My Thuan and Bao Minh, with a combined area of 1,288.58 ha. They have synchronous technical infrastructure systems capable of accommodating many domestic and foreign giant investors.

Nam Dinh is at the center of the South Red River Delta region and in the influence of the Hanoi - Hai Phong - Quang Ninh Growth Triangle and the Gulf of Tonkin Economic Belt. The modern and synchronous transportation system has enabled Nam Dinh to connect with economic centers and neighboring provinces. The province also has a young, abundant and highly skilled workforce, capable of meeting recruitment demands by investors. In the past years, in order to realize industrial development goals, the Nam Dinh Industrial Zone Authority advised the Provincial Party Committee and the Provincial People's Committee to work out a plan for industrial zone development to ensure efficiency and compliance with local planning and actual needs of investors.

With an open investment attraction policy and active supports for investors, existing industrial zones of Nam Dinh province have been basically "filled up". Specifically, Hoa Xa Industrial Park, established in 2003 on an adjusted area of 285.37 ha has a complete infrastructure system, including a wastewater treatment system with a daily processing capacity of 4,5Mekong Delta cubic meters. Its occupancy rate is 100%.

Rang Dong Textile and Garment Industrial Park, which was started in 2017, has been built with traffic infrastructure, rainwater drainage, power system and trees. With an accumulated investment value of VND1,400 billion to date, the 231-ha industrial park has attracted two investors, including Japan's Toray Group with US$203 million of investment capital. Many other investors already signed tentative contracts on factory construction investment in the industrial park.

In 2019, Nam Dinh Industrial Zones Authority worked with relevant agencies to advise the Provincial People's Committee and central authorities on the plan to handle the My Trung Industrial Park. The Ministry of Transport issued Document 9471/BGTVT-QLDN dated October 7, 2019 recommending the Prime Minister to allow VFC to carry out asset recovery and auction in accordance the law.

Mr. Nguyen Hoang Anh, Director of Nam Dinh Industrial Zones Authority, said, local industrial parks attracted 186 investment projects from 159 investors by 2021, including 52 projects of 48 foreign investors. Licensed investors registered to invest VND7,987 billion and US$1.01 billion, of which VND4,200 billion and US$700 million were disbursed into their projects. Tenants in industrial parks have significantly contributed to local socioeconomic development and created jobs for local people. In 2021, they made an industrial output value of VND25,000 billion and an export value of US$900 million (accounting for 30% of the province’s export value); created jobs for 4,700 workers; and paid VND450 billion to the State Budget. 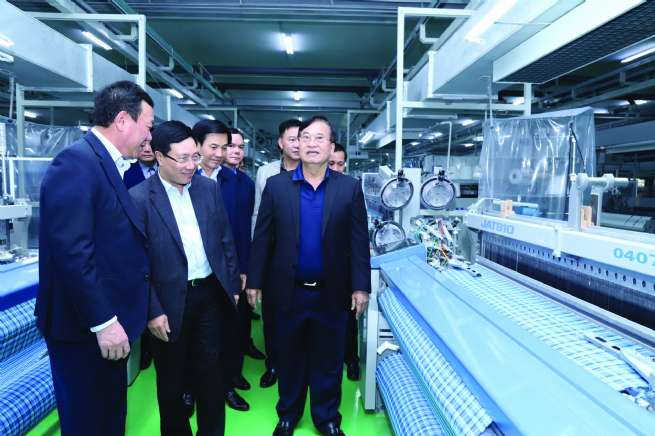 Nam Dinh province has applied investment incentives and supports in industrial zones in accordance with regulations of the Government of Vietnam. Especially, when investing in four districts of Hai Hau, Giao Thuy, Nghia Hung and Xuan Truong and in industrial zones, investors are entitled to investment incentives applied to economically and socially disadvantaged localities in accordance with the Law on Investment. In addition, the province has effectively reformed and simplified administrative procedures with publicity and transparency of information, planning, documentation and settlement time regarding investment projects. At the same time, the locality has a coordination mechanism for relevant agencies in implementing investment procedures at the Provincial Public Administration Service Center in order to create the best conditions for investors when they prepare investments in industrial zones.

Nam Dinh issued a list of investment projects according to Decision 2641/QD-UBND dated December 7, 2021 on investment promotion program in 2022, aiming to woo big investors with advanced technologies capable of generating big budget revenue for the province to rapidly increase the occupancy rate in industrial zones. The province also encouraged the private sector to invest in synchronous infrastructure in industrial zones to create a clean ground for investors.

In the coming time, to facilitate investment attraction, particularly before an expected wave of foreign inflows, Nam Dinh Industrial Zones Authority as an administer of industrial zones, will advise the Provincial People's Committee on targets and strategic approach to develop and attract investors into industrial zones. Accordingly, the agency will focus on: Completing the draft project on establishment of Ninh Co Economic Zone and submitting it to the Provincial People's Committee for consideration and to the Prime Minister for final decision; completing and submitting the planning project of Hong Tien and Trung Thanh industrial parks to submit to competent authorities for appraisal and approval to attract infrastructure investors for these parks to create a clean land fund in the coming period. At the same time, it will urge expanded Bao Minh Industrial Park to complete procedures for early construction; continue to monitor and recommend the handling of My Trung Industrial Park, urge the investor of Rang Dong Textile and Garment Industrial Park to accelerate infrastructure construction and entice investors into My Thuan Industrial Park.

Furthermore, the authority will continue to simplify administrative procedures, reduce the service time, enhance information publicity and transparency, research, deploy and apply online settlement of administrative procedures of Level 3 and Level 4 to ease access for investors, enterprises and people. It will build up a strong, professional and ethical workforce to better serve investors while eliminating any act of bureaucratic harassment.

Nam Dinh Industrial Zones Authority will actively cooperate with relevant bodies in the province to strengthen investment management, with focus placed on investment promotion and attraction, in industrial zones. In particular, priority is given to large investment projects with environmentally friendly, modern technologies.