From a low starting point in the early days of the province's establishment (1991), after more than 30 years of development, the health sector of Ba Ria - Vung Tau province has a relatively complete system of physical facilities. The human resources of the industry are regularly consolidated, enhanced and supplemented, so they are growing stronger, thereby meeting the task of taking care of people's health well. 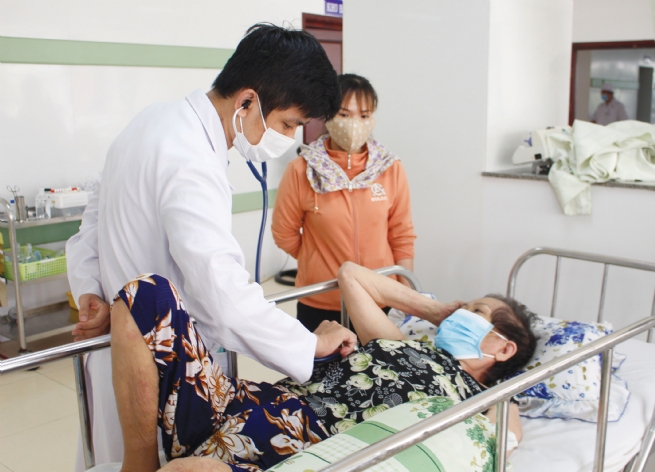 Besides investing in facilities, the provincial health sector also focuses on attracting, training and recruiting to develop quality human resources

In 2015, Ba Ria Hospital with a total investment of more than VND 2,000 billion was inaugurated and put into use in Long Tam ward (Ba Ria city), marking a remarkable development in infrastructure investment for the health sector. The hospital has a construction area of over 67,000m2, 17 floors, with 700 beds and separate functional areas. This is also the hospital with the largest scale and investment in the Southeast region. To have worthy development, the hospital has been paid attention and invested with a variety of modern machineries and medical equipment by the province to serve the examination, diagnosis and treatment of patients such as: digital subtraction angiography machine for the treatment of cardiovascular diseases; mammography machine for early detection of breast cancer; lithotripter; 128-slice CT scanner, MRI, Digital X-ray; and automated modern biochemical testing system.

Doctor Pham Minh An, Director of the Department of Health, once shared: "The construction of Ba Ria Hospital has been desired by the people in the province for a long time, and is also the cherished and concerned by many generations of provincial leaders." After having a spacious facility, Ba Ria Hospital has established more departments such as: Neurology, dialysis, oncology, trauma and orthopedics, internal cardiology-gerontology; at the same time deploying interventional cardiology and functional exploration unit. Up to now, this hospital has created people's trust in medical examination and treatment. Currently, Ba Ria Hospital has become the first medical unit in the province to meet the criteria of civilization, friendliness and modernity.

Another hospital project is also expected by medical staff, doctors and people to contribute to improving the quality of medical examination and treatment for the people. That is Vung Tau Hospital, located in Ward 11 (Vung Tau City), one of the typical constructions to celebrate the 30th anniversary of the establishment of the province. The hospital’s construction began in July 2017, with a total construction area of 10,330m2, an investment of about VND 1,094 billion. Vung Tau Hospital has the scale of a first-class hospital, including: 12 floors, with 350 beds; full range of departments and rooms such as: surgical critical care, general internal medicine, general surgery, otolaryngology, maxillofacial unit, ophthalmology, pediatrics, gerontology, obstetrics and gynecology, traditional medicine, physics therapy, artificial kidney, and diagnostic imaging. Up to now, this work has been basically completed. The new hospital is equipped with modern machinery, helping the unit effectively deploy advanced techniques and treatment methods. The hospital is expected to deploy specialties on anatomical pathology, oncology, and separate specialties on infectious diseases; neurosurgery, trauma and orthopedic surgery.

Along with the development of facilities, the provincial health sector also focuses on attracting, training and recruiting qualified human resources for long-term work in the province. This include a prominent Scheme on subsidy policy to attract human resources for the provincial health sector in the period of 2015-2020. Up to now, there are a number of good professional doctors who are attracted by this scheme and have worked at medical facilities in the province.