Although he is very busy and unfamiliar with the press, when we mentioned the business relating to the 20-year celebration of Binh Duong re-establishment, Mr Ho Minh Quang, President of Nam Kim Group, is very excited. With his dedication to Binh Duong, we have the opportunity to know more about the success story of Nam Kim Group. Quoc Hung reports.

Though Nam Kim Group is now a very famous brand in the market, can you tell us about its very humble start?
In 2002, Nam Kim was established in Binh Duong province with a starting registered capital of VND20 billion, a very modest value for a manufacturing company engaged in heavy industries.

With the right orientation, Nam Kim has achieved a rapid growth rate. The production capacity rose from only 50,000 tonnes in 2002 to 800,000 tonnes at present and to 1.2 million tonnes by the end of 2017. The company’s registered capital also climbed from VND20 billion to more than VND500 billion now, and to approximately VND1,000 billion in 2017. The workforce was also expanded from only 100 employees at first to nearly 1,500 employees now. After 14 years of development, Nam Kim Group is presently ranked second in the country in galvanised steel and seventh in steel pipe, according to the Vietnam Steel Association.

14 years is not a long time to grow, not to mention the global and domestic economic recession from 2007 to 2011. So, what has made the success of Nam Kim Group?

Nam Kim has four core values: (1) closed production and business process; (2) brand, reputation and quality; (3) customer policy; and (4) business culture.
Compared with other steel sheet companies in the country, Nam Kim Group is a very young business. But, the youth of a business is also an advantage. In spite of having a small production capacity in 2002, its plant was invested with cutting edge technologies and the most modern equipment. Thus, its products have the best quality on the market and are second to none among rivals.

Based on premium quality, Nam Kim Group had a successful branding strategy and developed a good distribution system. To date, its products have been present in all provinces across the country, while half of its output is exported to other countries in Southeast Asia, the Middle East, Africa, Europe and America. This is a testament to its product quality and to the trust of domestic and foreign customers. 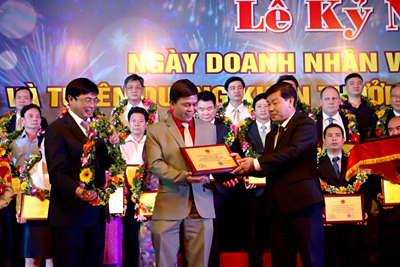 What are other factors in the success story of Nam Kim Group?
We are proud of our technology. But, good facilities can only work well in the hands of skilled, well-disciplined, united people. As the President of the Board of Directors, the highest position in the company, how to create a comfortable working environment and promoting the capacity of employees are my tasks. The current position of Nam Kim Group - one of two biggest galvanised steel sheet manufacturers in Vietnam and a Top 500 largest enterprise in Vietnam - comes from the solidarity, effort and dedication of the entire staff.

The steel industry has experienced years of volatility, especially during the economic recession from 2008 to 2011, sending many steelmakers to the wall. How has Nam Kim Group overcome such hardships?
In recent years, the steel industry in general and the galvanised steel sheet in particular have fluctuated dramatically. During its nearly 15 years of construction and development, Nam Kim Group underwent the toughest time from 2008 to 2011. To overcome it, the group introduced many solutions, particularly the effective use of capital sources, the effective handling of inventory and the timely investment. In 2011, Nam Kim Group invested in the second steel and roofing sheet plant in 2011 and the third one in 2015.

On the international arena, the integration process is creating both opportunities and challenges for businesses. And in the domestic market, competition is getting tougher. How do you approach this?
In my opinion, in the current tough period, businesses need to adapt for survival and growth. In particular, promoting core competences and having sustainable business strategies will create solid steps in this new phase. What companies need now is that the government forms an enabling, competitive, fair business environment.

Would you describe for us the current status of Nam Kim Group?
Competition is certainly always fierce. Steel products now compete with not only cheap imports, but also domestic abundant supplies. Being fully aware of this, Nam Kim Group always takes the lead in technological investment and renovation to meet the market.

We will continue to strongly carry out corporate restructuring to further focus on improving human resources, scientific and technological applications to production and business in order to raise labour productivity, improve product quality and lower production costs. We will concentrate on increasing our capacity for market access and expansion in both domestic and foreign markets, with special attention paid to new potential markets. We will continue to set up joint ventures and associated companies, while building, reviewing and establishing cost monitoring regimes to reduce and abolish unnecessary costs to lay the foundation for lowering product prices.

Binh Duong province will mark its 20th re-establishment anniversary in 2017 with a lot of achievements. From the perspective of business, how will Nam Kim contribute?
As a business and an investor in the province, I am very proud to be with Binh Duong province on the path of development, industrialisation and modernisation. Compared with many other local businesses, Nam Kim is still very modest the 15-year robust development has enabled us to contribute more. As I said above, when it was founded in 2002, we had only 100 employees or so, but we now have 1,500 employees. We also pay a lot of taxes to the State Budget.

In addition to business, Nam Kim Group is also very active with social security. The group has joined many social and charity programmes and activities in the province. Every year, Nam Kim Group hosts many charity programmes. Recently, the concern collaborated with Binh Duong Radio Broadcasting and Television Station to present 24 houses, worth VND1.25 billion in total. The firm has also granted scholarships for local students with excellent study records.

We will certainly side with Binh Duong province in particular and other locations across the country in general in social activities.

In general, the business and investment environment in Binh Duong province is normal. But, the rapid growth poses objective challenges to the locality. The rapid development has given rise to infrastructure overloading in many places. In my opinion, the province needs to upgrade key traffic routes and build new ones in the coming time to connect with export and import hubs, and ports in Ho Chi Minh City and Dong Nai province.

Nam Kim Group was present in Binh Duong province in 2002 with a very modest beginning. The well-invested plant had an annual output capacity of only 50,000 tonnes. The company’s core business is manufacturing and distributing cold-dip alloy (55 per cent zinc-aluminium alloy coated steel sheet in coil), galvanised steel sheet in coil, colour coating steel sheet in coil, and other industrial products. These products are mainly used in industrial and civil construction, interior and exterior decoration, and handicraft, electromechanical manufacturing, precision engineering and sampling steel products.