In response to the enabling State policy which views business as an entity to be served and as the driving force to improve economic competitiveness and independence, Dong Nai province advocates accompanying and supporting business in any circumstance. Vietnam Business Forum has an interview with Mr Dinh Quoc Thai, Chairman of Dong Nai Provincial People’s Committee, on this policy. Hoang Ngoc reports.

In 2016 and the first six months of 2017, Dong Nai was still one of leading localities in industrial development with diversified sectors, high growth rate, more rational industrial establishment structure and distribution, and higher rate of high-tech projects and supporting industries. 31 out of 35 large-scale industrial parks have completed infrastructure construction, while four small-scale industrial zones have completed their infrastructure and 19 others are completing it.

Agriculture made breakthroughs in productivity and restructuring, with a higher share of livestock farming. The deployment of new rural programmes is changing the face of the countryside towards modernity, with 113 out of 133 communes meeting new countryside criteria, or 85 per cent (compared with 2,235 communes in the country, or 24.5 per cent) and five new-countryside districts (Xuan Loc, Long Khanh, Thong Nhat, Long Thanh and Nhon Trach), compared with only 30 districts in the country meeting this rural standard. Seven communes meet advanced new countryside criteria.

The trade - service sector achieved remarkable results as it met local demands of livelihoods and production. Import and export performance progressed. Export turnover reached US$15.2 billion in 2016, up 7.9 per cent year on year, and import value totalled US$12.9 billion, up 1.57 per cent.

Environmental protection got better; socioeconomic infrastructure expanded considerably; science and technology human resources and intellectuals became an important source for industrialisation and modernisation, and gradual formation of a knowledge economy. 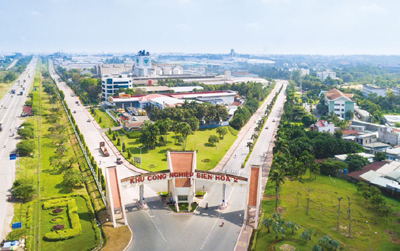 What are the core reasons Dong Nai province has been able to achieve the above results and create stable and sustainable development?
The above achievements derive from the following reasons:
One, being aware of local comparative advantages, provincial leaders knew how to promote internal strengths, utilise external forces, seize opportunities, identify right directions, and rationally direct rapid and sustainable socioeconomic development.

Five, the province strengthened State roles, focused on inter-sectoral and inter-regional coordination to bring into full play local potential and strengths, stepped up investment and trade promotion in order to expand the market and take the initiative in finding investors.

Could you please describe the solutions Dong Nai province will take to develop the economy and ensure social security?
Dong Nai will continue to selectively investment projects, encourage the development of investment projects engaged in high-tech, supporting, energy-saving and environment-friendly industries and projects engaged in agriculture, infrastructure and services. It will focus on investment restructuring where public investment is the centre and enhance corporate restructuring where the centre is State-owned corporations.

Dong Nai is a strong enterprise force. Before hardships against the business community in recent years, what efforts has the province made to support local businesses to overcome their difficulties?
To boost local business support, on August 24, 2016, the Provincial People's Committee and the Vietnam Chamber of Commerce and Industry (VCCI) signed a coordination mechanism aimed to create an enabling business environment for enterprises, with a strong focus placed on carrying out Resolution 35/NQ-CP dated May 16, 2016 of the Government on business support and development to 2020 where the private sector is seen as a motive force for enhancing economic competitiveness and independence, and effectuate business support programmes for better local business performance. The province has also implemented the facilitating State policy aimed to facilitate enterprises to make investment, do business and develop.

The Provincial People’s Committee also issued Plan 7912/KH-UBND dated August 31, 2016 on business support and development in Dong Nai to 2020; enforced Decision 2420/QD-UBND of Dong Nai Provincial People’s Committee dated August 2, 2016 on approval of the Business Registration Support Scheme in Dong Nai province in the period of 2016 - 2020 in the spirit of providing best conditions for business development with many drastic reform solutions and most practical supports.

In addition to efforts for a better business environment, what policies will Dong Nai province adopt to assist local businesses to successfully advance extensive integration?
In the coming time, trade liberalisation will be the mainstream. External relation expansion will open up many opportunities for investment attraction and development, but this process will also pose challenges to local businesses due to their weak competitiveness and new trade regulations overseas. For that reason, the Provincial People’s Committee directs provincial and local authorities to:

In addition, Dong Nai enterprises and entrepreneurs need to grasp information and make serious preparations for stronger competitiveness and efficiency; must gear to global dimensions, strengthen connectivity and cooperation, boost trade promotion and market search, and share thinking and actions with foreign enterprises to stand firm on domestic and world markets.