With right decisions, Ninh Thuan province achieved impressive socioeconomic progress. The provincial government has made efforts to improve the investment and business environment to make the province a worthy destination for investors. To learn more about the spectacular progress, the Vietnam Business Forum reporter has an interview with Mr. Tran Quoc Nam, Chairman of Ninh Thuan Provincial People's Committee. Han Luong reports.

Ninh Thuan is entering a new period of development. What solutions has the province adopted to maintain this progress?

Although the COVID-19 epidemic is reemerging, the country is facing great opportunities, especially thanks to the entry into new-generation free trade agreements like CPTPP and EVFTA and the robust spread of the Fourth Industrial Revolution. Without hesitation, Ninh Thuan firmly strengthened the economic structure, with particular focus on key areas and effective employment of new potential and advantages. The province reviewed, concretized and timely supplemented central policies on socioeconomic development adapted to local situations, basing on Resolution 115/NQ-CP of the Government; mobilized investment resources for building synchronous infrastructure systems; rapidly developed human resources in both quantity and quality; and accelerated innovations and effective use of achievements generated by the Industrial Revolution 4.0.

Particularly, how has the province focused on administrative procedure reform - a breakthrough in development in socioeconomic development? 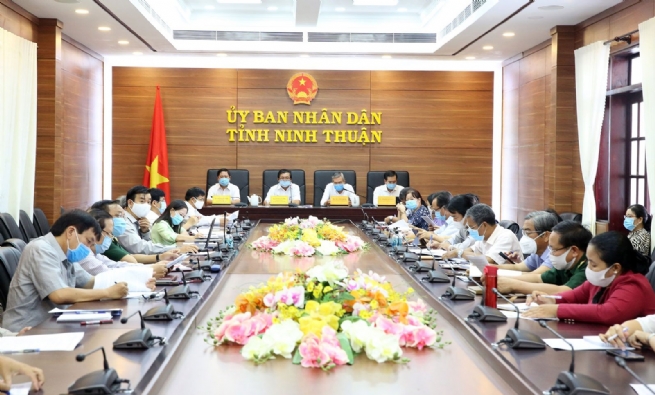 These results helped the successful implementation of 5-year socioeconomic development goals and plans. The local business investment environment was improved and recognized to have good economic governance, thus gaining valuable trust from investors.

Recently, the province has actively reviewed and proposed to the Prime Minister, ministries and central agencies to adjust and approve plans, with the focus on adjusting land use planning and forest development planning. The province also submitted the provincial electricity development plan for the period 2016-2025, with a vision to 2035, and Ninh Thuan Solar Power Development Plan for the 2016-2020 period, with a vision to 2030, to central government for approval and proposed that the Government and the Ministry of Industry and Trade integrate clean energy and renewable energy projects with a total capacity of more than 21,592 MW in the province into Power Planning 8 in 2021 - 2030; proposed the Government to issue Resolution 115/NQ-CP on specific support mechanisms and policies for the province. This is a very important policy on socioeconomic development of the province till 2023 and beyond, and provides the most favorable conditions for businesses to access investment resources and opportunities.

Could you tell us the province's specific achievements of improving the business and investment environment?

Ninh Thuan has firmly and seriously implemented efforts to improve the business investment environment and enhance the provincial competitiveness index. Accordingly, the province's investment and business environment has improved markedly, with its competitiveness rankings progressing positively. According to VCCI's assessment report, Ninh Thuan's PCI in 2019 ranked No. 37, climbing 6 places over 2018, to the group of well-performing provinces. In addition, 2020 was the fifth consecutive year that the province saw an increase of newly established enterprises. In 2016 - 2020, as many as 2,418 enterprises were established with a registered capital of VND39,634 billion, representing an increase of 2.1 times in business establishments and 4.7 folds in capital over the previous 5-year period of 2011 - 2015.

For that reason, without doubt, the appeal of Ninh Thuan investment environment has markedly picked up and created a new investment wave. That served as a premise for Ninh Thuan to make a breakthrough in 2021 when the province strives to fulfil a double goal of preventing the epidemic and boosting socioeconomic development. The province has strived to achieve the GRDP growth of 10-11%, per capita GRDP of about VND69-70 million, and the total social investment capital of about VND26,500 billion. I am confident that Ninh Thuan will advance and achieve robust, and spectacular socioeconomic development.