During half a century of development, Thac Ba Hydropower Joint Stock Company has made great efforts to complete its business tasks, ensure labor safety and social security, especially its responsibility to protect the environment, and effectively and sustainably use natural resources.

Leading light of the power industry 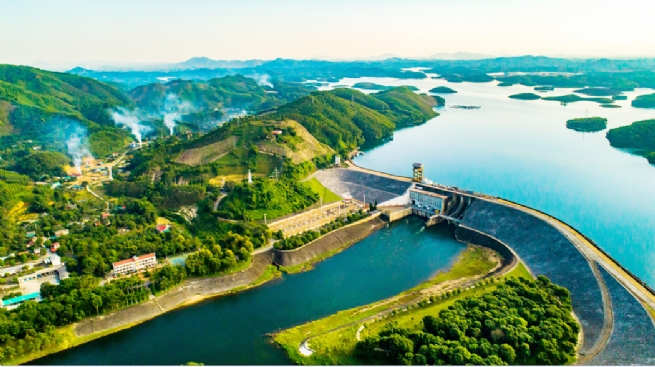 The 108-MW project produced an average output of about 400 million kWh of electricity a year. This was one of the key works in the first 5-year socio-economic development plan (1960-1965), the material and technical foundation for the socialist construction of Vietnam. On October 5, 1971, the facility was inaugurated, started the first turbine and fed the national grid.

Thac Ba hydroelectric reservoir is one of the three largest artificial lakes in the country, covering 235 km2 with more than 1,300 islands and storing about 3 billion m3 of water. In addition to power generation, Thac Ba hydropower reservoir also played a particularly important role in flood and drought prevention for the northern delta, winter-spring crop production and water supply regulation for domestic consumption and agricultural production.

In recent years, with the policy of socializing the electricity industry, in the northern provinces such as Lao Cai, Lai Chau, Dien Bien, Son La and Ha Giang, a lot of hydropower plants have been constructed. Facing these opportunities, the company has decided to establish the Technical Service Center to provide technical services for small hydropower projects.

After nearly 10 years of operation, the center has won many service contracts, trained operators; tested and calibrated electrical equipment; monitored permeability, settlement and displacement of constructions; compiled and adjusted working and troubleshooting procedures; maintained, repaired and installed small and medium hydropower plants in northern provinces, made a good source of revenue for the company, opened a new stage for multi-sector business strategy and sustainable development goals of the company.

To have safe and effective business, the company always gives high priority to occupational safety and health, fire prevention and rescue, and places a focus on protecting the environment and ensuring the working environment for employees.

Besides, for many years, Thac Ba Hydropower Joint Stock Company has always actively carried out a good charity movement for the community. In 2015 - 2020, in addition to funding the Golden Heart Fund, the Study Promotion Fund and the Charity Fund, the firm spent a lot of money building schools and rural roads and supporting poor households.

With its great contributions to national development in the past 50 years, the company has been honored with many noble awards by the Party and the State, including Second-class War Resistance Order, Third-class Independence Order, First-class, Second-class and Third-class Labor Orders, Victory Order, and Hero of the People's Army of Vietnam, in addition to many other outstanding certificates of merit and emulation flags granted by central and local authorities.