Based on Quang Ngai province's 2015-2020 achievements, Mr. Dang Van Minh, Chairman of Provincial People's Committee, foresees new development opportunities in 2021 - 2025. With the joint efforts of the political system, Quang Ngai expects to strongly breakthrough to have comprehensive development, becoming a well-developed province in Vietnam’s central region by 2025 and in the country by 2030. Cong Luan reports.

Could you please briefly introduce remarkable socioeconomic achievements after five years of implementing the Resolution of the 19th Provincial Party Congress? 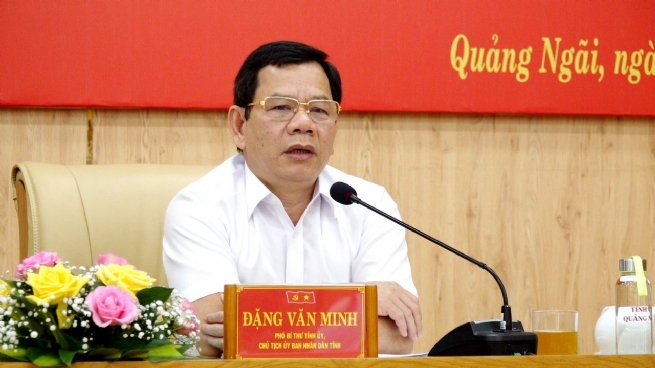 In five years, the province granted investment licenses to 565 projects with a total registered investment fund of VND193.89 trillion (US$8.5 billion), including 524 domestic investment projects with VND173,683 billion (US$7.6 billion) and 41 FDI projects with US$896 million. Especially in 2019, Hoa Phat - Dung Quat Iron and Steel Complex, costing nearly VND60 trillion for construction, was put into operation, with an expected output of 3 million tons, including 400,000 tons for export, in 2020, accounting for 34.8% of the province's total exports.

The achievements in the past years, especially in the 2016 - 2020 period, will enable and motivate Quang Ngai to accelerate socioeconomic development in the new term of 2021-2025. Quang Ngai will strive to become a fairly developed province of the central region by 2025, a stepping stone for it to have a similar status in the nation by 2030. To do this, it will focus on effectively implementing four key tasks (strengthening construction and rectification of the Party and the political system, strengthening public confidence in the Party, the government and the political system; reforming public administration, improving its administrative reform, governance and competitiveness performance indices; fostering tourism development to become an important economic sector; and promoting socioeconomic development, sustainable poverty reduction in mountainous districts) and three breakthroughs (mobilizing and effectively using resources for industrial development; developing high-quality human resources, with a focus on official training in qualifications and prestige to perform governmental tasks; and investing in synchronous and modern infrastructure development to create an impetus for development).

Lying in the central key economic zone, Quang Ngai has all advantages to develop maritime industry and economy, including petrochemical refining, metallurgy, manufacturing and seaport. Would you be kind enough to describe these advantages and how the province has utilized them?

As one of five provinces and cities in the central key economic region, over the past time, Quang Ngai has actively coordinated with central and regional agencies to work out regional development plans, programs and projects such as infrastructure investment, especially transport infrastructure system; jointly fostering investment attraction and trade promotion; developing tourism development cooperation; and joining in regional policymaking. 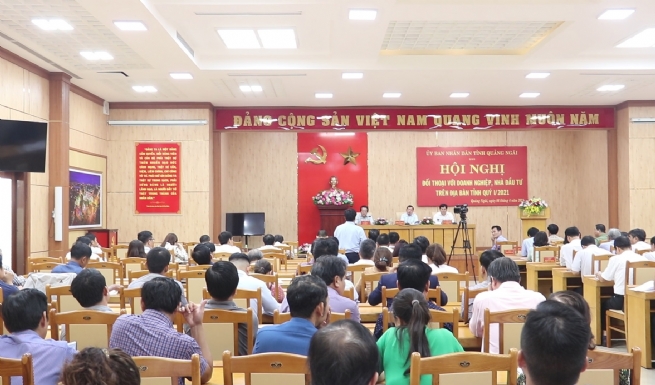 The province's greatest strength is industrial development, concentrated in Dung Quat Economic Zone, adjacent to National Highway 1A and North-South Railway. The economic zone is the starting point of one trans-Asian route connecting Vietnam, Laos, Cambodia and Thailand. Beside lying adjacent to Chu Lai Airport, it has Dung Quat deep-water port, capable of serving vessels of 50,000-100,000 DWT.

The heart of Quang Ngai industry is Dung Quat refinery, a US$3 billion investment by the central government. The facility is capable of refining 6.5 million tons of crude oil a year, or 148,000 barrels a day, meeting more than 30% national demand for petroleum products. Dung Quat I deep-water seaport system, covering an area of 1,158 hectares and stretching on a 10-km coastline. The operation of the port system has served gigantic projects such as Dung Quat oil refinery, Hoa Phat steel mill and Doosan Heavy Industries factory. In addition, it also put into operation two PTSC general ports and one Gemadept general port and is preparing to complete the Hao Hung Port (with five berths) capable of receiving ships from 20,000 DWT to 70,000 DWT.

Tapping these advantages, Quang Ngai province has reaffirmed its determination to develop industry in the period of 2021-2025. To date, Dung Quat Economic Zone was approved for expansion to 45,000 ha (the master plan on Dung Quat Economic Zone construction to 2035, with a vision to 2050, is being drafted) to become a multi-sector economic zone, with a focus on oil refining, petrochemical, heavy industries, light industries, financial services, banking, travel and real estate. 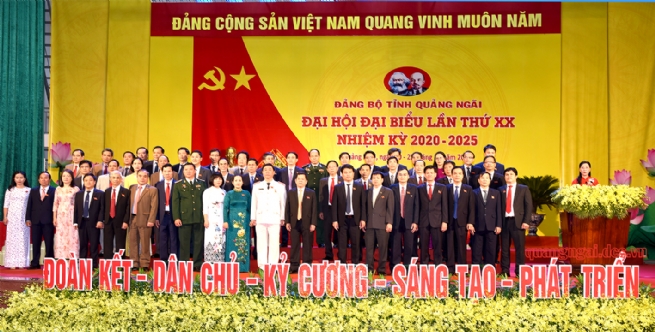 Currently, Dung Quat Economic Zone has attracted 357 projects with a total registered capital of US$14.39 billion, including 56 FDI projects with US$1.91 billion and 301 domestic projects with VND251,733 billion. Licensed projects are involved in industries and services. The petrochemical industry has two giant refining projects and many service providers for them. Currently, gargantuan projects are being implemented, including the expansion of Dung Quat refinery to 8.5 million tons a year and building two gas-fired power plants, fueled by Ca Voi Xanh gas field. 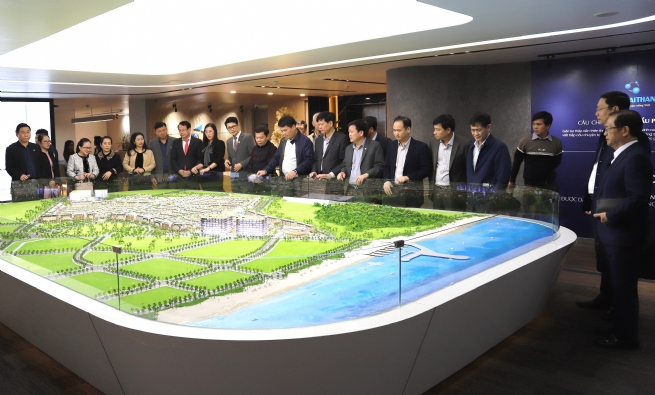 After five years of applying Conclusion 18-KL/TU of the Provincial Party Committee on industrial development in 2016-2020, what important results has Quang Ngai achieved? What are the province's plan for the coming time?

The first result is building a strong unity of the whole political system, the consensus and response of businesses and people to groundbreaking industrial development in the province. Second, the investment and business environment has been continuously improved by concerned actors to provide the most favorable conditions for business development and investment attraction. Third, the infrastructure system of Dung Quat Economic Zone and industrial zones was upgraded and expanded, especially Dung Quat deep-water seaport system and key external transport infrastructure, to serve enterprises to invest, do business and scale up their operations. Fourth, the province has attracted many giant industrial projects for priority sectors as planned. Typical projects comprise oil refining, petrochemical, gas power and heavy industries that characteristically need large seaports, supporting, mechanical engineering, and light industries for export-oriented production. Dung Quat Economic Zone is oriented to become a national petrochemical center and a coastal industrial city. At the same time, the province will further draw seaport logistics and freight services to develop Dung Quat Economic Zone into a port service center meeting the development needs of the economic zone, the province and the region. 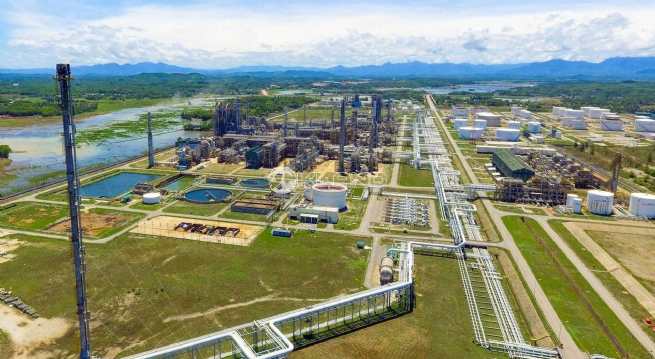 Based on its achievements, the industry of Quang Ngai developed well in 2016-2020 to add quality and value. In 2021-2025, the province advocates accelerating industrial development to raise the share of high-tech industries, develop non-oil industries and supporting industries and keep the annualized growth of 8-9%. It will step up industrial restructuring with prioritized focus on high-tech and clean industries, processing and manufacturing, waste treatment, renewable energy, supporting industries and labor-intensive industries. It will work with central authorities to build the National Refining, Petrochemical and Energy Center in Dung Quat Economic Zone; join forces with central authorities, neighboring Quang Nam province and investors to carry out projects to bring gas ashore from Ca Voi Xanh field to fuel gas power plants in the economic zone. It will support investors to speed up implementation of key industrial projects in Dung Quat and industrial zones to bring them into operation soon. It will call investors to develop synchronous infrastructure for industrial zones; expand and speed up the development of VSIP Quang Ngai Industrial - Urban - Service Zone. At the same time, Quang Ngai will focus on developing supporting industries for the refining and petrochemical, metallurgy, mechanical engineering, manufacturing, food processing, wooden furniture and electronic industries, besides attracting supporting industries for the textile and garment industry.