Taking advantage of scientific and technological strengths, many districts of Hanoi have adopted effective production models and initially improved the material and spiritual life of people. Hanoi's agricultural economy maintained steady growth in the first six months of 2021. Based on this result, the city’s agriculture is striving to achieve its growth target of 4.2% this year.

In rural development, Hanoi districts have actively promoted crop and livestock restructuring. By identifying of potential crops and livestock, many households have boldly invested in farming production and achieved high economic value. 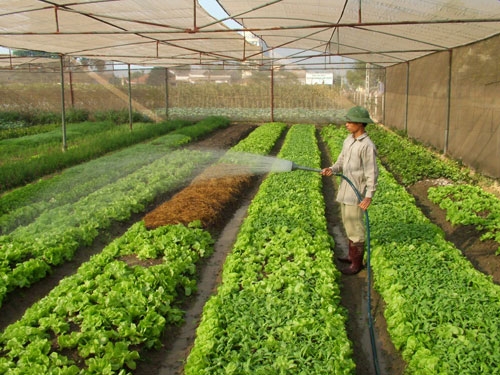 One of the effective economic models in Dan Phuong district is the Ha Den grape growing model initiated by Mr. Nguyen Van Noi (Phuong Dinh commune). Vines have long been cultivated and grown in central coastal provinces, but Noi surprised many people by growing Ha Den grape on his land. Compared with other plants, Ha Den grape is not too difficult to grow while it brings much more income than other crops. “This grape is a short-term crop that is typically grown for eight months, with two harvest times of the year, usually in June and in November. The June harvest has a higher yield due to a longer dormant period. Revenue of a sao (360 square meters) is about VND40-45 million,” he said.

“After opening a mushroom factory, my family has a much more stable income. The factory also provides seasonal jobs for local workers in their leisure time. The hourly wage is VND25,000 - 30,000,” she said.

Mr. Chu Phu My, Director of the Hanoi Department of Agriculture and Rural Development, said, to achieve the target growth of 4.2% this year, the city’s agriculture sector needs more effort because weather from now to the end of the year is unpredictable, livestock and fowl diseases are potentially risky and the consumer market is still affected by the COVID-19 pandemic. “In the coming time, regarding crops, Hanoi will focus on developing high-quality vegetables and fruits to supply the local market and other provinces and cities, especially toward the end of the year. As for livestock, the city will accelerate herd expansion; apply technical measures to improve production efficiency, ensure food supply and growth targets,” he emphasized.

To realize the goal of improving production value, the cooperative will expand the high-quality rice area and enlarge the organic vegetable area by 3 ha to increase the supply for the market, said Ms. Vu Thi Huyen, Director of Nam Phuong Tien Organic Agriculture Cooperative (Chuong My district). Besides, the cooperative focuses on taking care of Dien pomelo gardens for better productivity and higher value.

Based on the market demand, Hanoi’s agriculture will surely achieve the target growth of 4.2% this year by developing linkage chains and stabilizing output markets for products.