After being expanded by its investor, Dong Dinh Industrial Complex (Cao Thuong town, Tan Yen district) will have the opportunity to make a breakthrough change in investment attraction and become an industrial engine of Tan Yen district. 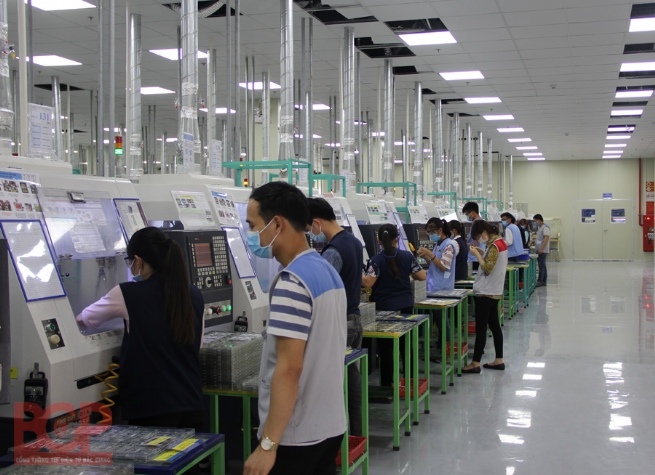 In 2011, the 29.66ha Dong Dinh Industrial Complex was established and invested by Tan Yen District People's Committee, the first of its kind in the district, aimed to support economic restructuring and industrial growth of Tan Yen. After 10 years of operation, the industrial complex has 11 tenants which hired most of the rentable area.

In recent years, Tan Yen district has concentrated on drawing funds for industrial development and many businesses are keen on investment in the district in general and Dong Dinh Industrial Complex in particular, but the infrastructure fails to meet their increasing requirements.

In fact, on May 8, 2018, the Bac Giang Provincial People’s Committee issued Decision 290/QD-UBND on expansion of Dong Dinh Industrial Complex which will be scaled up from 29.66 ha to 66.16 ha and the investment will be handed from the Tan Yen District People's Committee to Dong Tam Commercial Construction Joint Stock Company.

Then, Dong Dinh Industrial Complex is bordered by Cao Thuong town in the north, Cao Xa commune in the west. Viet Lap commune in the south and Cao Thuong Communal House in the east. The land area will consist of over 50 ha of industrial area, over 8.4 ha of green land and water surface, 0.7 ha of public, administrative and service, 1 ha of technical infrastructure, and 6 ha for traffic and parking. The total infrastructure investment fund is over VND251 billion (US$11 million).

According to Decision 609/QD-UBND dated July 15, 2020 of the Provincial People's Committee, investment construction will be completed in 2021 -2022 to draw tenants.

Mr. Nguyen Manh Ha, Deputy Director of Dong Tam Company, said, immediately after being assigned to carry out the project, the company was actively supported for implementation by the Bac Giang Provincial People's Committee, Tan Yen District People’s Committee and relevant provincial and local agencies to carry out administrative procedures for the project. The Party Committee and the People’s Committee of Tan Yen district regularly directed related local bodies to support the Company in compensation for site clearance and settlement of administrative procedures within their jurisdiction to quickly complete the project as planned.

“To date, Dong Dinh Industrial Complex has reviewed the entire land area for site clearance to make detailed plans. The company already selected a construction contractor which is ready to carry out infrastructure construction. In early 2022, we will welcome secondary investors to build factories when the country is expected to control the epidemic and return to a normalcy,” Ha said.

Beside ensuring progress, the investor will also pay attention to environmental protection, with priority given to building a wastewater treatment station with a daily capacity of 2,000 cubic meters a day, with treated water meeting ‘A standard’ when being discharged into the environment. At the same time, priority is assigned to drawing investors that use environmentally friendly advanced technology and create well-paid jobs for workers.