Hau Giang province has become a “new investment destination” in recent years where current hardships may lead to an open prosperous future. 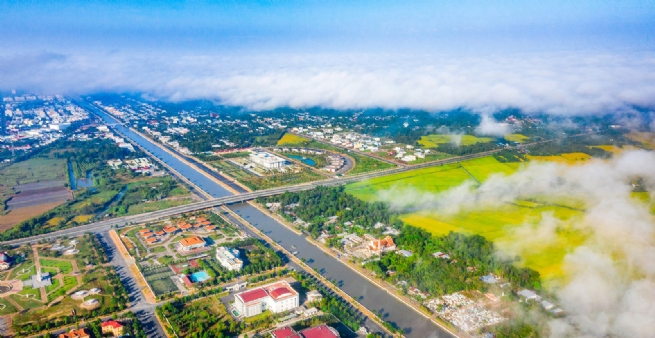 Two Japanese and Vietnamese businessmen inspired me to support the community, promote investment and directly invest in Hau Giang. The first one is Ito Junichi, Manager of the Ho Chi Minh City Office of Nissho Iwai Group (present-day Sojitz Group, one of the seven largest commercial investment groups in Japan). He first came to Vietnam in 1989 to learn about investment. In 1993, he opened an office in Ho Chi Minh City. Living through many surprises and difficulties right from the early days of economic opening, Sojitz is now managing more than 23 successful businesses and projects in Vietnam. Ito Junichi is currently the President of World Link Japan (WLJ), too. WLJ has invested US$113 million into two investment funds since 2006. The first fund focuses on the Vietnam market and the second is on Southeast Asian countries. At these two funds, WLJ works as an investment bridge for Vietnamese and Southeast Asian companies seeking the market or business partnerships with Japanese companies.

The second is Tran Ba ​​Duong, who turned a desolate white sandy land in Quang Nam province into a leading bustling industrial, seaport and economic center in Vietnam. The success stories of Ito Junichi and Thaco have inspired many Vietnamese entrepreneurs today and motivated us to go to a new land to make an investment and call for investment funds that Hau Giang is focusing on.

Hau Giang people have long been known for their hospitality, friendliness and affection. Recently, many investors are very impressed with the strong commitments of provincial leaders. Investment into Hau Giang must be a long-term effort of investors who must endeavor and go with the local government to unlock potential and resources for development, from synchronous transport infrastructure to human resource development.

An infrastructure investment project or a property project lasts 20, 30, or 50 years or longer. From this perspective, we returned to Hau Giang to explore investment opportunities in 2018 and we are currently conducting surveys and feasibility studies for each of the seven projects for which we signed a memorandum of understanding with Vi Thanh City in early 2022.

A vision of a modern center

Hau Giang lies in the heart of the Mekong Delta like Can Tho City. Therefore, the province is endowed with locational strengths and functions as a satellite area of ​​Can Tho City. Hau Giang also easily links with Soc Trang, Bac Lieu and Kien Giang. It is also near Can Tho International Airport and Tran De Port in Soc Trang province.

In the vast Mekong Delta, especially seven provinces in the downstream of the Hau River, the formation and centrality of Can Tho City is clearly defined by the Politburo in Resolution 59-NQ/TW dated August 5, 2020 on the construction and development of Can Tho City to 2030, with a vision to 2045. So, which areas will be directly affected by Can Tho city? Taking geo-economic position into account, Vi Thanh City, the capital of Hau Giang province, will be No. 1.

From that vision, we boldly proposed building a railway from Can Tho to Vi Thanh. Vi Thanh will be a “new Can Tho” with a vast land fund and complete resources for economic development. Can Tho Airport, which is as large as Tan Son Nhat Airport, can receive the largest aircraft in the world. In the future, it will open many international flights. Residential and industrial areas will be established along the railway. With a large land fund, it will be very convenient for Vi Thanh to develop industrial zones and reasonable towns where the traveling cost will be much cheaper than that of Ho Chi Minh city - Bien Hoa - Vung Tau Railway.

Vi Thanh - Can Tho Railway will also help develop a very strong economy, boosted by tourism, industry and urbanization. After landing at Can Tho Airport, visitors can take a train to Vi Thanh City. During a 40-minute journey, they can visit industrial, tourist, urban and sightseeing areas.

Moreover, it takes less than 60 minutes to travel the 60-km convenient traffic route. Besides, the establishment of Tran De International Central Port and Chau Doc - Can Tho - Tran De Expressway, which was approved for development by the Prime Minister and waits for ratification by the National Assembly, will drive the industrial and commercial growth of Soc Trang and Hau Giang.

Thus, developing this railway together with urban areas and industrial zones will give a strong boost to Can Tho and Vi Thanh to grasp the chance to become a new bustling and modern Tan Tay Do that complements the current Tay Do or Can Tho.

With its cooperation ties with many financially viable, experienced investment partners in Japan, Pacific Group Co., Ltd would like to share development recommendations and take action to realize the above aspiration of turning Hau Giang into a bustling and modern center in the near future.

To attract investment resources for development, investment promotion is very important, regular, long-standing and patient. After an investment conference, a province may or may not attract attending investors. They certainly know local strengths whether they invest or not. Investment conferences need to be diversified and sometimes need to be held in big cities like Hanoi and Ho Chi Minh City or key markets that the province is targeting (the United States, the European Union, Japan, South Korea, Hong Kong or China), not necessarily only in their home country. If the connectivity infrastructure is not synchronized, it takes more than five hours for investors to reach the location, travel time which may deter investors.