In 2018, the transport sector of Nghe An province has made efforts to introduce consistent solutions, attract all resources, effectively carry out transport infrastructure investment projects, and promote local socioeconomic development.

According to Mr. Huynh Thanh Dien, Vice Chairman of the Nghe An Provincial People's Committee, despite limited budget, the transport sector of Nghe An province has adopted creative ways to apply flexible mechanisms and policies to attract all investment resources for infrastructure development. Many projects have been completed and put into operation like Yen Xuan Bridge (linking Nghe An and Ha Tinh provinces and creating driving force for development in the southwest of Nghe An province and northwest of Ha Tinh province). 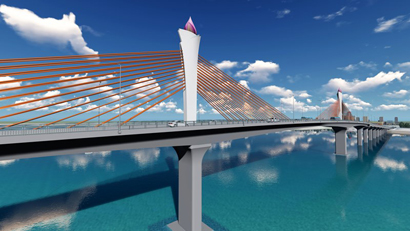 To synchronously carry out these important transport projects, Mr. Nguyen Huu An, Deputy Director of the Nghe An Department of Transport, said, the sector has actively advised the Provincial People's Committee to propose the Government, ministries and central agencies arrange capital sources to deploy Vinh - Cua Lo traffic project soon. Therefore, in the first phase, this project is currently executing groundwork items, road surface and support facilities. The project is determined for full completion in early July 2019.

On the North - South Highway, Nghi Son - Vinh section (invested by Project Management Unit 6 and the feasibility study report is being prepared), the section connected to Thanh Thuy - Pacxan Border Gate (invested by Project Management Unit 85, and its pre-feasibility study report is being made), Nghi Son - Cua Hoi coastal road (the Nghe An Department of Transport is completing investment procedures for the project from National Highway 46 in Cua Lo to Provincial Road 535 in Cua Hoi and Cua Hoi Bridge across the Lam River were kicked off on February 12, 2019.


In particular, one major success of the Nghe An transport sector in executing the Politburo Resolution 26 and the Resolution of the 18th Provincial Party Congress was the sector that advised the Provincial People’s Committee to ask the Ministry of Transport for permit to upgrade some local roads (with a total length of 733.45 km) to national roads and advised the Provincial People's Committee to upgrade some district roads (with a total length of 549.4 km) to provincial roads.
Moreover, the department continued to advise the Provincial People's Committee to ask the Provincial People’s Council to issue Resolution 56 on clearing traffic safety corridors, timely directed flooding and storm remediation and ensured smooth traffic. Rural transport system was also developed effectively.
In addition, the Nghe An transport sector coordinated with relevant bodies to deploy other important projects such as DKC Petroleum Depot and Vissai Port.
In recent years, key traffic projects have importantly promoted socioeconomic development and strengthened competitiveness, connectivity and inclusive growth momentums.