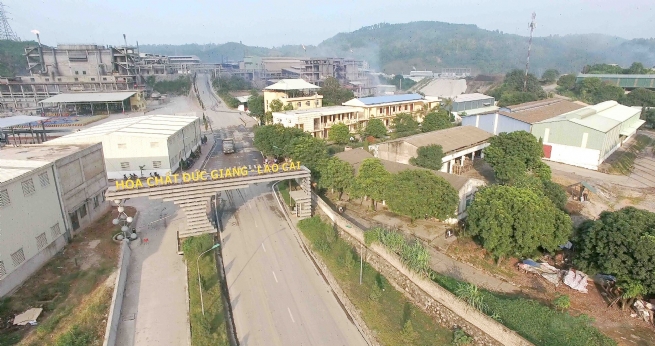 The apatite ore processing complex is currently employing about 2,000 workers and paying an average of over VND500 billion to the State Budget each year. In 2021, its revenue was estimated at over VND8,000 billion. These results have importantly helped local socioeconomic development and boosted downstream mining and processing in Lao Cai province.

About a half of the output is currently exported and the rest is supplied to the domestic market by distribution agents across the country. Based on a sustainable development approach, the group always attaches importance to aligning business with environmental protection. For years, no environmental incidents have occurred. Occupational health and safety for workers is maintained and the working environment has been made increasingly green and clean. In addition, the company always accompanies local social security.

Mr. Dao Huu Duy Anh, General Director of Duc Giang Chemicals Group, said, to have good business results, the group has been greatly facilitated by provincial agencies. This resulted from the province’s efforts for a better investment and business climate.

“However, we faced difficulty in site clearance in Mining Project 25 with a reserve of 3,000,000 tons, to be extracted in five years. People asked for much higher compensation than the government-announced framework. In addition, the current provincial resource tax infrastructure fee applied to ores is too high. Therefore, we are asking the Provincial People's Committee for reconsideration,” he added.

In the coming time, in addition to boosting business performance and improving livelihoods of employees, the group will carry out solutions to produce 40 million tons of apatite ores, enabling the complex to work stably in the next 30 years. Second, the group will seek a way to solve waste (gypsum) because cement plants currently consume only nearly a third of waste (as additive to cement production).