State-owned Housing and Urban Development Corporation (HUD), administered by the Ministry of Construction, mainly invests and develops new urban areas, residences and real estate. After 30 years of construction and development, with innovative thinking, creative methods and internal strengths, HUD has risen to obtain many important achievements and made remarkable contributions to national renovation and development. HUD was honored to be named Labor Hero in the Renovation Era by the Party and the State. 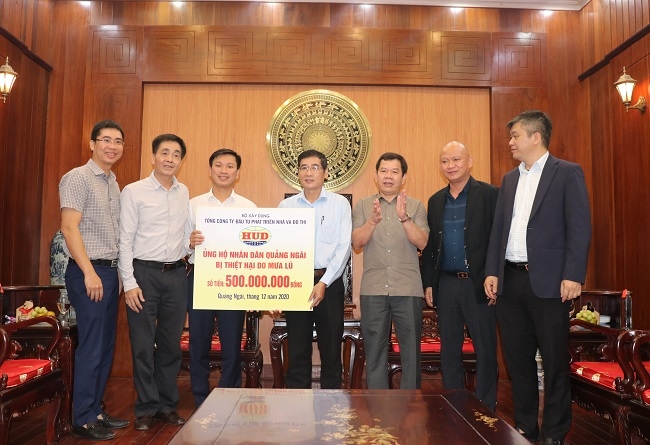 Currently, HUD is a holding corporation with 11 project management units, two branches, 16 independent companies, two associate companies and three joint ventures. It has more than 2,000 employees, of which, more than half hold university and postgraduate degrees.

Kicked off in 2010, Phu My New Urban Area, covering 169.57 ha, was first approved by the Quang Ngai Provincial People’s Committee in 2009. The project was carried out in the downtime of the real estate market in 2011-2013 and some parts of the projects were taken by the provincial government for other investors. As a result, its area shrank to 122.8 ha. Despite numerous hardships in construction and investment, HUD was still determined to implement the project and achieved many positive results. Up to now, this is one of a few projects in Quang Ngai City to complete compensation for land clearance and land allocation of 97.4% of the area, and the remaining area is being compensated for site clearance, about 2.8ha (mainly residential land).

In addition, the project fulfilled 100% of financial obligations for land-use fees; completed 50% of synchronous technical infrastructure investment; provided infrastructure for dwellers who already built houses and lived in the urban area; and built 104 commercial houses on the 50-meter wide trunk road. Due to the impact of the COVID-19 epidemic, the project faced certain difficulty in capital recovery. However, determined to build and develop a new sustainable, synchronous and modern urban area, HUD increasingly focuses investment on landscape and living environment to meet the high demand of customers.

In addition to carrying out Phu My New Urban Area, HUD has paid great attention to social security. Upholding HUD’s good tradition of charity and social security, the corporation and its affiliates have launched many meaningful and practical activities in the past years, including appreciation gifts to people with recognized meritorious sacrifice and contributions to the nation, social security and new countryside construction. In 2016, in response to the movement “For the beloved sea and islands", the HUD Party Committee cooperated with the Party Committee and the People's Committee of Ly Hai district and An Hai Secondary School to launch a social security event in Ly Son Island district: Presenting 20 computers and one projector set (including laptop, projector and screen) to the school; handing gifts to 50 pupils and 5 teachers living in difficulty. The HUD Party Committee presented two laptops to the Party Committee and the People's Committee of Ly Son District. In 2020, HUD donated VND500 million for healing consequences of Storm No. 9. Meaningful community activities are also a beauty of HUD culture, a motivation for HUD employees to work harder for HUD to achieve new, fast and sustainable development and become a leader in real estate development and construction in the country.