ST24 and ST25 rice varieties, developed by Mr. Ho Quang Cua and his scientist colleagues, have proved their quality and brand in the market. In Bac Lieu province, ST24 and ST25 have been piloted since 2020, yielding high productivity, quality and efficiency. 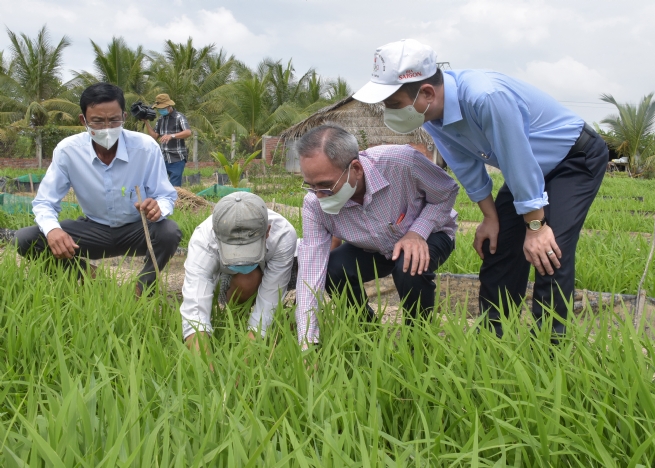 In 2020, to expand production and search for high-quality rice varieties suitable for Bac Lieu province, the Chairman of the Provincial People's Committee signed Decision 854/QD-UBND on “Building a demonstration model and replicating ST24 and ST25 rice production in Bac Lieu province”. The model was deployed on land with 2 - 3 crops a year and on combined shrimp - rice fields cultivated ST24 and ST25 rice with high productivity and quality. The product was for domestic consumption and for export and was more profitable on the same area unit. Simultaneously, the province reorganized commercial production models to form a large-scale and sustainable ST24 and ST25 rice production chain.

After a short time of application, some results were achieved. On a ST24 rice pilot model on a field with 2-3 crops a year: The ST24 rice grew and developed well. It was suitable for local soil, especially alkaline soil. Initially, compared with mass-produced rice varieties in the province like Dai Thom 8, Nang Hoa 9 and OM18, ST24 was free or almost free from leaf blast fungus. Farmers needed three times fewer pesticide sprays. The average yield in five models in five districts and towns was 5 - 6.6 tons per hectare.

On consumption cooperation, the Bac Lieu Agricultural Extension Center persuaded and invited companies to cooperate in rice production and consumption in bid to build a sustainable production chain. As a result, Bac Lieu Agriculture and Fisheries Development and Investment Joint Stock Company bought rice on 25 ha (out of total 60 ha) from farmers at the price of VND8,000 per kilogram (15 ha in Hong Dan and 10 ha in Vinh Loi). Farmers in remaining localities like Hoa Binh, Phuoc Long and Gia Rai failed to reach a purchasing agreement with the company and they thus sold to free merchants for VND 6,000 - 6,500 per kilogram.

On the combined shrimp - rice production model: ST24 and ST25 were well adapted to soil in Hong Dan, Phuoc Long and Gia Rai. They were tolerant to salt and alum and easy to cultivate. ST24 was also superior to other varieties grown on the shrimp - rice field such as Mot Bui Do, OM 2517, OM 5451 and BTE1 (F hybrid) because it was resistant to harmful blast fungus. Besides, its characterized vertical leaf limited harmful leaf rollers, proved its suitability for cultivation on the shrimp - rice field in the north of National Highway 1A. The production cost was VND1.7 million per hectare, lower than that of other mass-produced varieties. With an average productivity of 6 tons per hectare and the selling price of VND7,000 per kilogram, higher than the Mot Bui Do rice sold for VND6,500, the value premium was VND4.7 million per hectare.

With the above model, the Bac Lieu Agricultural Extension Center played well its role as a bridge for companies and farmers, calling on the former to supply seeds and purchase all contractual rice to make the latter feel secure in growing the new varieties.

Reportedly, Bac Lieu province also combines rice farming with giant freshwater shrimp farming to generate additional incomes for farmers. At the same time, the province reorganizes commercial production to help farmers to create high quality and safe products to meet market demand and rice traders; and forms a sustainable supply chain where all output is bonded to be purchased by traders and adapts to climate change to build premium rice and shrimp brands.