Stepping into renewable energy in 2015, projects invested by Truong Thanh Vietnam Group (TTVN Group) have to date achieved remarkable successes and affirmed its leadership in this industry in the country. This is also one of notable highlights of TTVN Group's 10-year development path. Vietnam Business Forum’s reporter has an interview with Mr. Dang Trung Kien, President TTVN Group, about this content.

Could you please introduce the 10-year imprints of TTVN Group?

TTVN Group, established on December 19, 2012, is engaged in renewable energy and real estate. In 10 years of development, the group has built reliable partnerships with many large domestic enterprises as well as foreign partners in Thailand, France, Japan, Ireland, Germany and other countries. TTVN Group and its member companies or affiliates have investment projects in 16 provinces and cities and have always been highly appreciated for their performance and competence.

In renewable energy, TTVN Group has invested and operated three solar parks in Phu Yen, Quang Ngai and Binh Dinh provinces with a combined installed capacity of 357MWp before June 30, 2019. In addition, we have invested in wind power and rooftop solar power projects, typically V1-2 Wind Farm in Tra Vinh province, thus affirming its position and leadership in wind power in Vietnam.

In real estate, TTVN Group has carried out many resort projects in Binh Dinh, Phu Yen, Quang Ngai and other provinces. Its projects provide a harmonious living environment between nature and people and sustainably save energy. We have persistently pursued this goal.

With those values, TTVN Group has been honored with many lofty titles like Top 10 Clean Energy Business in Vietnam (in 2019 and 2020), Best Solar Power Developer in 2019 and Top 10 Outstanding Renewable Energy Project 2021. These reflect the right approach and professional and effective working spirit of TTVN Group.

On October 21, 2021, V1-2 Wind Farm invested by Truong Thanh Tra Vinh Wind Power Joint Stock Company (a joint venture between TTVN Group and Sermsang Power Group of Thailand) was completed and put into commercial operation. Would you mind telling us about the construction process and significance of the project to the new development stage of TTVN Group?

At the Tra Vinh Investment Promotion Conference 2020, TTVN Group was granted the investment certificate for V1-2 Wind Farm (Truong Thanh Tra Vinh Wind Power Plant) by the Provincial People's Committee. This was the first wind power project we made.

In particular, on October 21, 2021, V1-2 became the first wind power project in the province to be completed on schedule and put into official operation. The 12-turbine plant will generate 168 million kWh of electricity annually, enough to meet the power demand of 100,000 households. It was expected to rake in US$16 million in revenue, pay VND384.307 billion in tax and create jobs for many people. 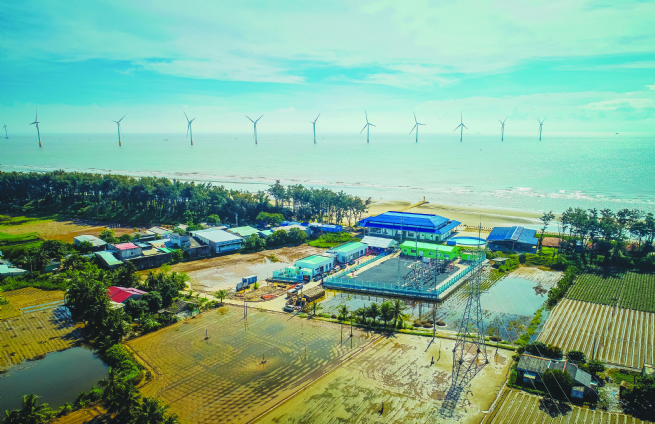 This meaningful project has opened the pathway for TTVN Group to ‘ride the wave to the vast sea’ and rise to new heights. At the same time, it has demonstrated the group's long-term commitment to providing green energy and fostering sustainable development.

What are development goals and strategies of TTVN Group and of Tra Vinh province as well?

Aiming to become one of Top 50 companies in Vietnam and gradually reach out to the region, in the next 5-10 years, TTVN Group will pursue two core business fields of energy and real estate. However, the group will change to expand wind power and gas power projects on a large scale. In addition, we will consider taking part in the carbon credits market, which is a hot trend in the wake of the successful United Nations Climate Change Conference 2021 (COP-26).

Therefore, we have a long-term commitment to renewable energy, a desire to cooperate in environmental protection and climate response; support and build green, sustainable energy sources for the future of the country.

The above approaches are selected through careful consideration of its competency and experience gained in the past 10 years of development. And of course, it is impossible not to take into account market needs and global economic trends, including in Vietnam. In Tra Vinh, in addition to its invested projects, TTVN Group will survey, research and invest in some projects in the coming time such as expanded V1-2 Wind Farm, Dong Hai 3 Wind Farm, Truong Thanh Wind Farm, and technical infrastructure systems in Ngu Lac Industrial Park, Dinh An Urban Area and TTVN Riverside Building. The group will focus on investing in inland waterway and wind power logistics service areas (in the expanded V1-2 Wind Farm) to serve its offshore wind power projects, as well as projects in Tra Vinh province as a whole. It will also help develop eco-tourism and marine tourism in the province.

What do you think about the Tra Vinh investment environment? Do you have any recommendations and advice to the province to improve its competitiveness and draw more investment funds?

Tra Vinh province has a favorable and friendly business environment. Authorities always listen to and support investors to remove their difficulties and obstacles and help them to carry out their projects effectively. This makes TTVN Group choose Tra Vinh as a key investment destination in the near future.

In the coming time, TTVN Group hopes to receive more support from the Provincial Party Committee, the Provincial People's Committee and other agencies to invest in priority industries in the province and speed up industrialization and modernization of Vietnam in general and Tra Vinh in particular.