Starting with poor backward facilities, weak personnel and underperforming apparatus on the first days of operation, after 30 years, the Hai Phong Tax Department has made great progress in all aspects and fields toward modernity and professionalism.

On August 7, 1990, the Council of Ministers issued Decree 218/ND-HDBT on establishment of the State tax collection system directly under the Ministry of Finance. Like other localities in the country, the Hai Phong Tax Department was established from the merger of three revenue collection organizations, namely commercial and industrial tax department, State-owned tax department and agricultural tax department. 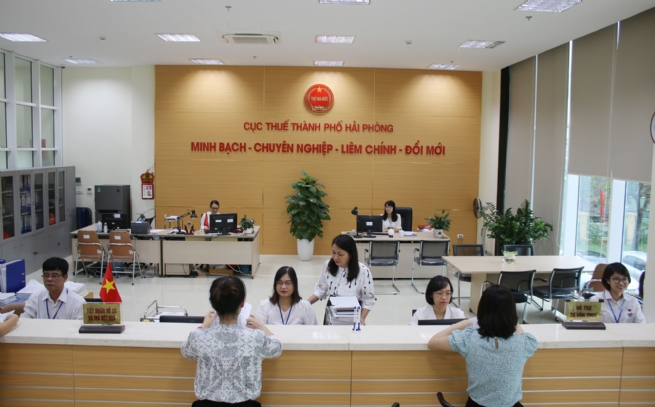 On the first day of establishment, the department had 13 divisions and 12 district tax agencies with 759 employees, of which 12% held university degrees, 36% had intermediate degrees and the rest were at elementary levels. At that time, the working location was scattered in many places where facilities were very poor and outdated. Work was mainly manual.

After 30 years of development, the Hai Phong Tax Department has matured in all aspects and has over 800 employees, of whom over 90% hold university degrees or higher, with over 27% holding postgraduate degrees. The organizational apparatus has 13 functional divisions and nine regional and district tax agencies. The Party cell was upgraded to attach to the City Party Committee. With 652 members, it has 16 branches and grassroots Party cells. Trade Union, Youth Union and Veterans Association in the department are completely unified.

In its early days, in 1990, the revenue of the Hai Phong Tax Department was only VND91 billion but the figure soared to over VND27 trillion in 2019 (nearly 300 times higher than the first year) and is expected to top VND33 trillion in 2020.

Central and local authorities recognized and awarded many prizes on the 30th anniversary for its ongoing efforts to make a dynamic, creative port city of Hai Phong and develop in the right trajectory as specified in Resolution 45-NQ/TW of the Politburo and the Action Plan 76 of the City Party Committee.