Aspirations for a Green, Modern City

In 30 years since provincial reestablishment, Tra Vinh has made increasingly positive changes from socioeconomic development to infrastructure. Along that development path, with the support of the government and people, the construction sector has attained many inspirational achievements that help create a spacious and cultured face of Tra Vinh.

“The outlook of Tra Vinh is increasingly spacious as the province has engaged the entire people in the effective cultured urban construction campaign. This result proves the consensus and unanimity of the leadership and the active participation and contribution of the people,” said Le Minh Tan, Director of Tra Vinh Department of Construction. 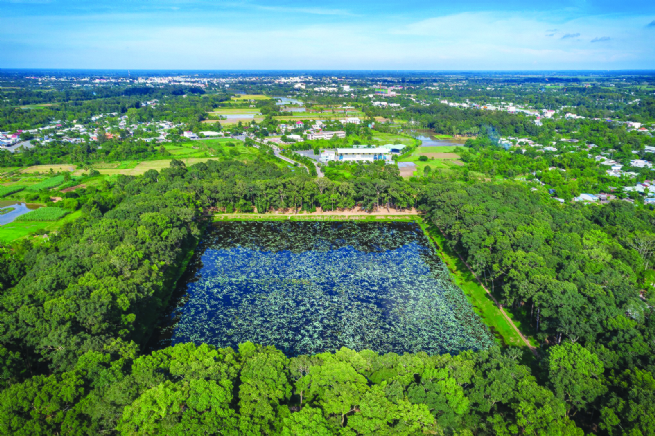 On urban development, the province currently has nine district-level administrative units, including Tra Vinh City - a provincial city of second grade and a northern urbanization driving force; expanded Duyen Hai Townlet - the center of Southeast urbanization, a fourth-grade urban area, expected to be upgraded to a town according to Resolution 934/NQ-UBTVQH; expanded Tieu Can townlet - the center of the western urbanization, a fourth-grade urban area; and nine urban townlets of Cang Long, Cau Ke, Chau Thanh, Cau Quan, Tra Cu, Dinh An, Cau Ngang, My Long, and Long Thanh, which were recognized by the Provincial People’s Committee as jointly developed urban areas in 2010-2017. “Urban development has helped fulfill socioeconomic development targets of Tra Vinh and given a remarkable facelift to socioeconomic development in rural areas. After more than 10 years of implementing the National Target Program on New Rural Development, all 85 communes in the province completed, and got approved, new rural area development plans, helping raise the urbanization rate to 29.55% in 2021,” he said.

He added, “Administrative reform is the driving force to promote economic growth, associated with socioeconomic management and development goals in general and with the construction sector in particular. Therefore, in the past time, we have focused on carrying out many consistent solutions, regularly reviewed legal documents and administrative procedures, removed difficulties and obstacles; proposed and recommended competent authorities to adjust, supplement and complete regulations to create a favorable, healthy, open and transparent investment and business environment for people, investors and trade organizations. In the coming time, the construction sector will concentrate on reforming the personnel apparatus and improve the Public Administration Reform Index (PAR Index) of the sector and take the satisfaction of partners as a key goal.

During nearly 30 years of construction and development, especially in the current period of integration and development, Tra Vinh province will continue to strongly reform administrative procedures because its top criterion is to become a green and modern city. This is an important choice of urban development towards an inclusive solution to protect the environment and improve living quality of local people. Director Tan said that a green city will not stop at urban greenery but will also focus on factors such as green space, green buildings, green traffic, green industry, green environment and green eco-friendly living community.