After 30 years since re-establishing the province, the transport infrastructure system in Tra Vinh province has had a fairly clear and relatively synchronous development, making an important contribution to the provincial socio-economic development and promoting its investment attraction.

In 1992, when it was newly re-established, the transport infrastructure of Tra Vinh province was difficult. The whole province had 2 national highways with a total length of 37km, but only 21km were paved; 4 provincial roads with a total length of 126km and district roads were all dirt roads, cars could only travel with limited loads in the dry season. The province's transport sector was also very limited, the whole province had only 1 state-owned road transport business with about 20 vehicles which were all old and outdated. Its waterway transport was developed but spontaneous, without the management and administration of the State. 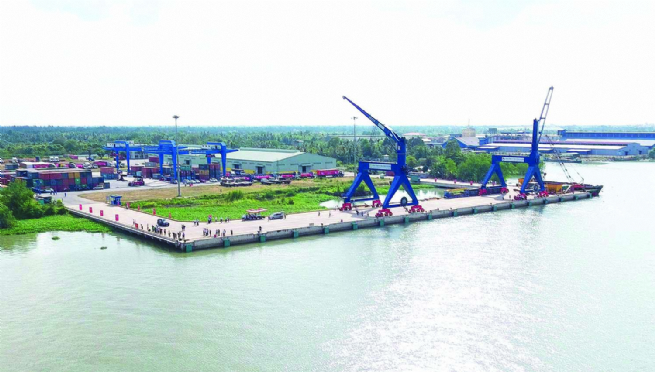 Dinh An seaport in Dinh An economic zone, an important driving force for the development of the marine economy of Tra Vinh

To solve the above difficulties, with the motto "Traffic is one step ahead", the Provincial Party Committee, the Provincial People's Council, the Provincial People's Committee and the Transport sector of Tra Vinh have taken advantage of investment capital sources for traffic, especially focusing on mobilizing non-budget capital sources to reduce the burden on the state budget, with some investment forms such as: PPP, BOT, etc. Thanks to that, the province's transportation network has grown strongly, synchronously, and in accordance with the planning, meeting the requirements of socio-economic development and ensuring national defense and security of the locality.

Currently, the whole province has 978.38 km of national highways, provincial roads and district roads; in which, asphalt concrete roads and bituminous roads are 863.87km (88.3%), dirt and aggregate roads are 114.51km (11.7%) and over 5,500km of rural roads. In particular, the province has 4 national highways with a total length of 271.46km; including 155km of asphalt concrete roads and 116.46km of bituminous roads. A number of important traffic works and projects have both contributed to the socio-economic development and created highlights in the landscape and urban face such as: Long Toan Bridge on National Highway 53; Channels for large-tonnage ships entering the Hau River, in Duyen Hai town, Duyen Hai district and Tra Cu district; and Co Chien Bridge on Highway 60.

Along with contributing to removing bottlenecks in trade, Tra Vinh's transport system also helps connect with provinces in the Mekong Delta. On the other hand, Tra Vinh has a coastline of 65km and is located between two important waterways in the region (the Cua Dinh An - Cambodia route and the Co Chien - Tien River route) so it is convenient to connect with the provinces along the river: Soc Trang, Vinh Long, Can Tho City, An Giang, and Dong Thap, and other countries in the region by water transportation.

The completion of the traffic structure also promotes the development of the transport sector of Tra Vinh. Currently, the province has 109 business units of road and inland waterway transport. The province strongly develops various types of public transport such as bus, taxi, well serving the travel needs of tourists and people.

In the period of 2021-2025, Tra Vinh will continue to improve and develop transport infrastructure, especially developing maritime transport. Tra Vinh is not only located along a large river, but is also a coastal province overlooking the South China Sea, has a system of convenient river ports and seaports with channels for large-tonnage ships, thus it is convenient to become a new trade center of the region and the whole country.

According to the development orientation of transport to 2030 and vision to 2050, the transport system of the province will connect continuously and synchronously between neighboring provinces and the region; and step by step modernize traffic infrastructure in order to improve the quality of operation, ensuring smooth traffic and ensuring security and national defense.