The northern province of Hai Duong is striving to create optimal conditions for Japanese investors, Secretary of the provincial Party Committee Pham Xuan Thang affirmed on May 30. 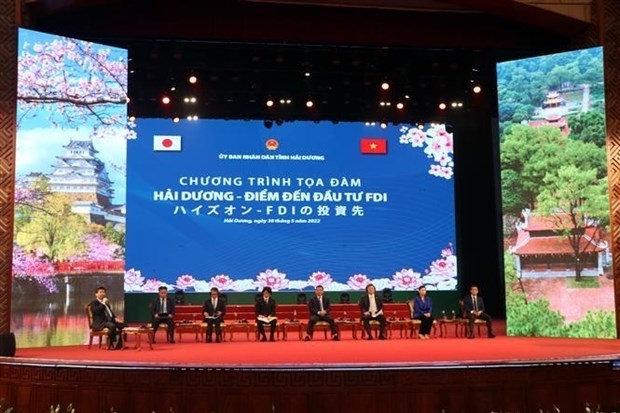 At the event in Hai Duong (Photo: VNA)

He made the pledge during a conference highlighting Hai Duong as a destination for foreign direct investment (FDI).

Green growth and digital transformation play a major role in the province’s development strategy for 2021-50, Thang said, underlining that FDI serves as a leverage for Hai Duong to fully tap its potential.

Hai Duong will make efforts to further improve its investment climate, and step up administrative reforms and housing projects to serve foreign experts, he stressed.

He advised the Vietnamese province to ensure quality human resources, and invest in health and education infrastructure to meet workers’ demands, as well as guarantee power supplies for production, update regulations and remove bottlenecks facing enterprises.

Hai Duong recorded average GRDP growth rate of 8.1 percent from 2016-20, higher than the national average. Its economy is ranked 11th out of 63 provinces and cities in the country.

Despite the adverse impacts of COVID-19, the province saw an expansion of 8.6 percent, ranking eighth nationwide.

Its investment climate has improved, with the provincial competitiveness index (PCI) jumping to 13th from 47th, while the Public Administration Reform (PAR) index climbed 11 places to 19th.

Hai Duong’s economy is projected to expand 11.6 percent in the first half of this year.

As of the end of 2021, the province was home to 11 industrial parks and 33 industrial clusters with occupancy rates surpassing 84 percent. Infrastructure in five IPs is being improved while another is being expanded to welcome investors.

Hai Duong is planning to develop 25 IPs and 52 industrial clusters for the 2021-30 period, including a major industrial zone spanning more than 10,000ha linking Hanoi and Hai Phong.

To date, the province houses 490 FDI projects from 26 countries and territories, with a combined registered capital exceeding 9.2 billion USD. The projects create stable jobs for over 200,000 local workers.