Through more than half a century of construction and development, Hai Duong Porcelain has always tried to constantly innovate to preserve the trust of Vietnamese consumers.

As one of the first 14 factories of the domestic industry established in the three-year plan (1958-1960), Hai Duong porcelain used to have the leading role in the country's light industry; with nearly 2,000 cadres and workers working at one time. Hai Duong porcelain products became familiar to many Vietnamese families and were also exported to many countries. That pride was even multiplied when, in the afternoon of July 26th, 1962, President Ho Chi Minh visited the company with the advice that "Vietnamese porcelains need to be painted Vietnamese flowers". He took the pen and wrote 5 words on the flower vase: "Must strive to make progress", then signed Uncle Ho below.

After the success in the subsidy period, Hai Duong Porcelain could no longer catch the innovation wave of the market economy, so operation became increasingly difficult. Typically in 2008, the Company had above 100% of negative equity, debts equal to 140% of charter capital, employees' income was not enough to live on, and its products almost disappeared from the market. To revive the business, a series of solutions were implemented, including: equitizing, reducing the production scale from 3 to 1 production line, from 1,320 lines to 44 product lines; arranging the apparatus in a streamlined direction; focusing on the market of 15 northern provinces and cities. In 2016, the company also invested VND15 billion to install a production line of all kinds of bowls according to Japanese technology to produce high quality products suitable for the market. Taking a large stranded boat out to sea is not easy and cannot be done "overnight" and needs active support from many sides, but with the high determination of the Company's leadership and the consensus of all cadres and employees, it is believed that Hai Duong Porcelain will transform strongly in the future. 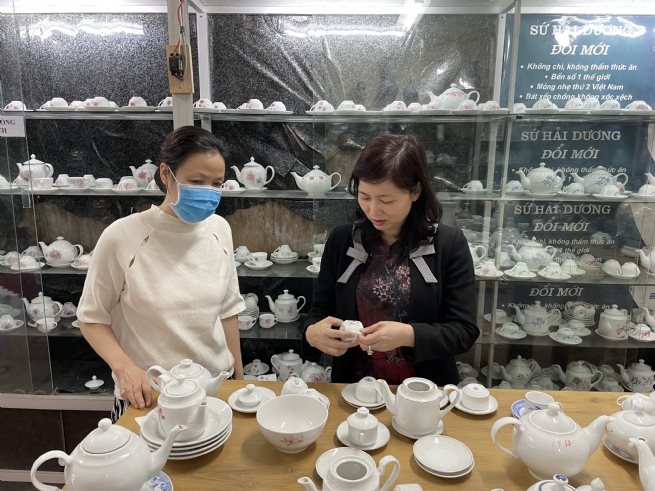 In 2016, Hai Duong province had a plan to move the porcelain factory out of the center of Hai Duong city and is expected to move it to Chu Dau Nam Sach area, focusing on becoming a ceramic and porcelain production area of Hai Duong province along with other ceramic and porcelain companies operating here. Hearing this decision, many cadres and employees who have been working at the factory, even many local people could not help feeling pity. But that is the general development trend, it is also a great opportunity for the business to change and revive if it is given proper and timely attention and support. Up to now, Hai Duong Porcelain still maintains high durability and is one of the few domestic units producing safe, lead-free porcelain. The potential for development is great, but "adversity impedes capability"; if the resources are unlocked, Hai Duong Porcelain will develop again.

However, after nearly 5 years of waiting, by the end of 2021, the factory relocation has not been implemented. The company cannot invest in expanding production - business while the cost of renting space usually accounts for 15-22% of the annual revenue. This is also the reason why Hai Duong Porcelain is still "fumbling around" and the last five years are probably the most difficult phase since its establishment. Without passive waiting, the Company has moved some production lines and workers to a new location, and produced right at Chu Dau Hai Duong Porcelain Ceramic Joint Stock Company. However, restoring production here is difficult in many ways, mainly due to the dispersion of resources.

In mid-2021, Hai Duong City officially announced that the factory relocation would be done before June 2022. More than ever, the cadres and workers of Hai Duong Porcelain hope this relocation will be done as soon as possible, from which the enterprise can focus on mobilizing all of its resources to improve production and business capacity to help Hai Duong Porcelain grow stronger.

The potential for development is great, but the capacity is limited. Hai Duong Porcelain is trying its best and is looking forward to receiving the attention of all levels of the industry, and the support of consumers in the return journey to affirm the Hai Duong Porcelain brand.